Game of othello becomes increasingly popular, but many people know this game as “reversi“. Even in some Wikipedia posts you can read that reversi is another name of othello. In fact, they are two different games. Both played on 8×8 board with two-color discs, but details are different.

I would like to bring you closer to the rules of these two games. I would like you to perceive the differences.

Before describing rules of reversi and othello lets make little “historical introduction”. Game called reversi was undoubtedly known since XIX century. Some sources say that it could be invented by Lewis Waterman or John Mollett. It is highly likely that any of these men used some older concept.

Interestingly, the game of reversi was one of the first games produced by the German company Ravensburger (the same one that released Malefiz).

Othello is a variant of reversi codified by Goro Hasegawa from Japan. His company – Kabushiki Kaisha Othello – registered word “othello” as a trademark. We can therefore say that  game of reversi is more “traditional”, while othello is contemporary game formed on the basis of reversi. Intelectual property related to othello is still protected.

Today othello is a serious mind sport. There are tournaments, there are world champions, there are organizations promoting the game of othello. World Federation of Othello exists since 2005. Japanese are especially good in this sport. The current world champion is Yusuke Takanashi, who took the title from Makoto Suekuni.

Although reversi has longer history, I’ll describe the rules of othello first. It will be more convenient because othello rules are well established.

To play othello you need a board with 64 square fields (8×8). The board for othello is always green (as shown below).

You also need 64 pieces (also called “disks” or “discs”), which are white on one side and black on the other side. Each disc can be repeatedly reversed during the game, depending on which player wins it.

Before the game start, four discs are set on four central fields of the board. They are arranged in a “chessboard-like” pattern so the black disc is on the left side of each player, and white is on on the right. This initial setup is shown on a diagram below.

One player is Black and the other plays is White. Black begins the game and then the players make moves alternately.

In one move player can place one disc of his color on the board. Discs don’t move, but they can change color many times (they can be fliped).

In othello capturing is mandatory in every move! You must capture at least one enemy disc. Capturing is done by cathing (sandwiching) enemy discs between your newly placed disc and one (or more) of other own discs.

Capturing can be made vertically,  horizontally or diagonally. As a result of capturing enemy discs become discs of player who made a capture. In practice they are reversed to the other side and they change color.

The diagram below shows an example of the capturing. If it were Black’s turn to move, Black could play in the field marked with a black star (C4). Then the disc standing on the D4 would be captured and would change color to black. The capture would be made with the help  of the disc on E4.

If it were White’s turn to move, White could play in the field marked with a white star (G4). In this case White would “catch” two discs (F4 and E4). The capture would be made with the help  of the disc on D4.

As i said, in othello capturing is mandatory in every move! If you cant capture any enemy discs, you can’t make a move.

Capturing can be made vertically,  horizontally or diagonally. If it’s possible to capture in two or more directions, capturing occurs in all directions at once. Such situation is presented on the image below.

In this situation it’s White turn to move. Placing white disc on a field marked with a star (F3) means capturing verticaly (F4 and F5), horizontaly (E3) and diaganally (E4 and D5). All these discs will change to white.

The aim of the game is to reach the maximum number of own pieces on the board at the end of the game.

The game ends when all the fields are occupied. Sometimes game can be ended earlier if no player can make a move. Most often such situation occurs when all discs of one player are wiped out (it is possible).

Game can also lead to the situation where player can not make move, but his opponent can. In this situation play passes back to the other player.

Othello rules are actually simple, but studying othello can take a lifetime. There is incredible beauty in in this elegant, yet very surprising game.

Now I can explain what exactly reversi is.

Today, no one actually plays a real, “ancient” reversi. The rules of the game are similar to othello, but there are some significant differences.

First, in reversi there is no strictly established color of the board and discs. The board can be brown, white or yellow. It even happens that the old reversi boards have no square fields, but circular fields joined by lines. Discs colors may be various eg. green and red or red and blue or purple and yellow. 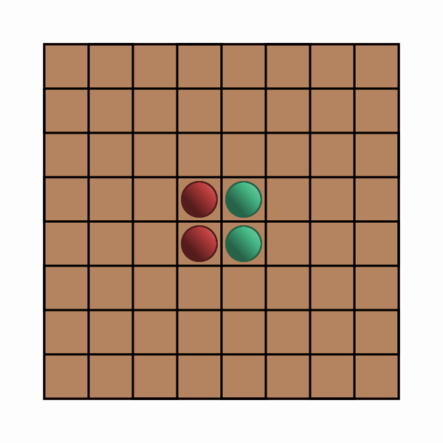 In Othello such position is not impossible. By the way, it is believed that such position results in an uneven game. Therefore othello eliminates the possibility of starting the game this way. In reversi this is possible.

Third, in some reversi variants capturing is possible only in one direction. I read old descriptions of the reversi rules which ordered to choose only one of the possible capture direction in the situations, where there are few possibilities (like on the image below). If Red would play in the field marked with a red star, he would have to choose between vertical and horizontal beatings. Such rules changes very much in the nature of the game. 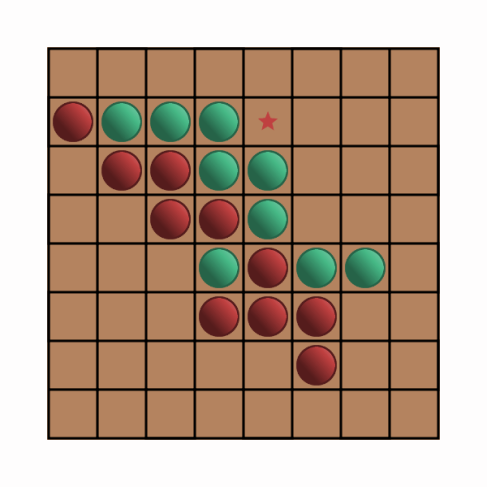 Fourth, in reversi there is no passing turns. If only one player loses the ability to move, the game ends.

Why reversi and othello are confused?

I mentioned that othello is a newer and more refined game, but the intellectual property related to this hame is still protected. Reversi is not a registered trademark, so for this reason creators of games and apps try to avoid using the name of othello. Furthermore, in order not to violate the rights of othello, they try to make some little changes themselves, eg. they use red and blue discs instead of black and white, yet the rest of the game is based on the rules of othello.

Some fans of othello complain that confusing these two games is bad for othello. People play othello and they call it reversi. This makes it difficult to promote the knowledge about othello.

Othello is a great game for many reasons. It is simple, yet how dramatic and surprising! Personally I love this game and I study its strategy. I hope this is not my last post about othello.

You want to play Othello better?

If you want to learn something on Othello strategy and tactics, see my other articles: