I have already complained that majority of board games have simple boards, just straight lines or squares. Games with circular boards (like spiders and flies) are less common, and there are not many games with boards designed on more complicated shapes (like vsadniki).

Today I want to show you a strategy game that makes perfect use from a round board. It’s Ringo

Ringo is a game known in Germany, probably since the beginning of the XX century (and perhaps even in the XIX century). I don’t know much about its history. It’s mentioned in Discovering Old Board Games by Robert Charles Bell (well known expert on games). This book was published in 1973, so apparently Ringo was already an old game.

Ringo is certainly a newer version of some older “war games” with element of defending citadel. One player is the attacker and second plays as defender. There are many games of this type (eg. Tablut, Hnefataf or Belagerung). I also met games similar two Ringo but played on a square board with diagonal lines. However, I think original round board of Ringo has a lot of charm.

I warn that I met with several different sets of rules for Ringo. First I describe the most common variant, and finally alternative rules.

Ringo is a board game in type of “citadel defending”, with no random element. Players make moves alternately. One player tries to get to  the center of the board. Another players tries to stop him.

To play Ringo you need a round board with 49 fields. Middle circle is called fortress or citadel. Other fields are situated on 5 rings divided into 8 pie slices (zones) and are alternately dark or white. Only one zone has fields of the same color. This is neutral zone.

Board is shown on the image below.

You also need 7 black pieces and 4 white pieces to play.

Because of this, White is called Defender and Black is called Attacker.

Attacker starts the game (the black moves first). Then the players make their moves alternately.

Black pieces (the Attackers) can move one space to the right, to the left or to the front (towards the center of the board). Black pieces may not move backwards (centrifugally). The diagram below shows the possible moves of black pawns. 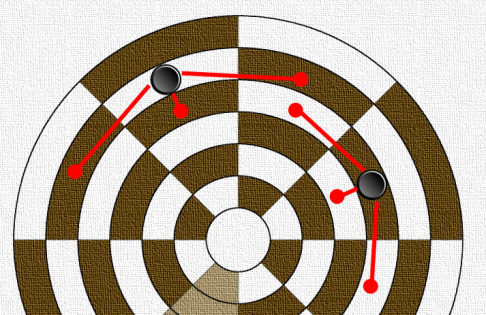 White pieces (Defenders) can move one space to the right, left, forwards and backwards (so they can move concentrically and centrifugally). The diagram below shows the possible moves of white stones. 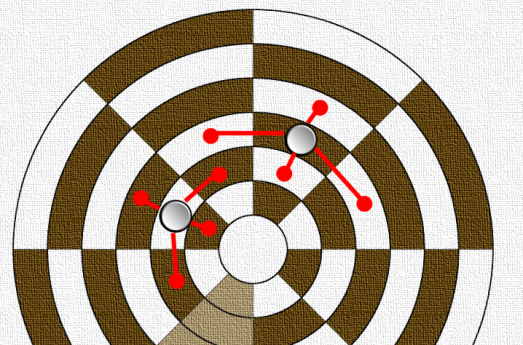 In practice usually all pieces move to the next field of  colordifferent than the field they stay on. The Attacker may not move backwards, but Defender may.

Defenders may not enter the citadel (central field of the board).

Only one piece can occupy one field.

Capturing in Ringo is done by jumping, like in checkers. Opponent pieces are captured by jumping over  them and landing on the free field just beyond them. White pieces can capture in all directions. Black pieces can’t capture backwards.

Capturing is not mandatory. In one turn only one piece can be captured.

The image below shows an example of capturings made by Defenders. 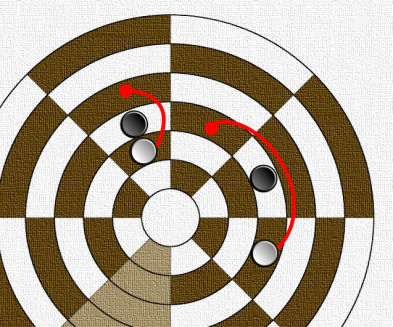 Although the defenders may not enter the central field of the board, they can capture single black piece standing on this field. Such capture is shown on the image below.

Neutral zone  is of particular importance. Player may not capture pieces standing one the fields of this zone. However, he can attack from the nautral zone, and jump to the Neutral Zone as a result of capturing.

There are variations of the Ringo with different rules on neutral zone (see below – Ringo variants).

Pieces can move one square forward, backwards or sideways and only Defenders may move backwards. Capturing is done by jumping, but it’s not possible to capture stones in the neutral zone. As you probably guessed, neutral zone has crucial importance in strategy.

If you read somewhere else about Ringo, you can meet with a slightly different set of rules. I will explain these alternative rules to you. I warn that these different rules may exist in different configurations, and the selection of each of these rules makes substantial changes in the nature of the game.

The board in Ringo is (nearly) always the same, but different variants can vary the number of pieces, the rules of moving, rules of capturing  and rules on the Neutral Zone.

Adopting some of these rules may significantly affect the level of difficulty the game, the pace of the game and general nature of the game.

Ringo is incredibly dramatic game. It can be very surprising. Pretty soon you will discover how important the neutral zone is for making a successful attack. Then perhaps you will discover that it is worthwhile to divide defenders on two groups – those who defend the Citadel and those who have to kill Attackers.

A drawback of the game is fluid set of rules and the lack of a developed knowledge about tactics. Don’t worry! Just play Ringo and maybe one day you’ll open the first clubs or you write the first book on Ringo strategy? In the past Reversi was such unknown game, but it gave the basis for othello. Such underdeveloped games can be the beginning of something great 🙂