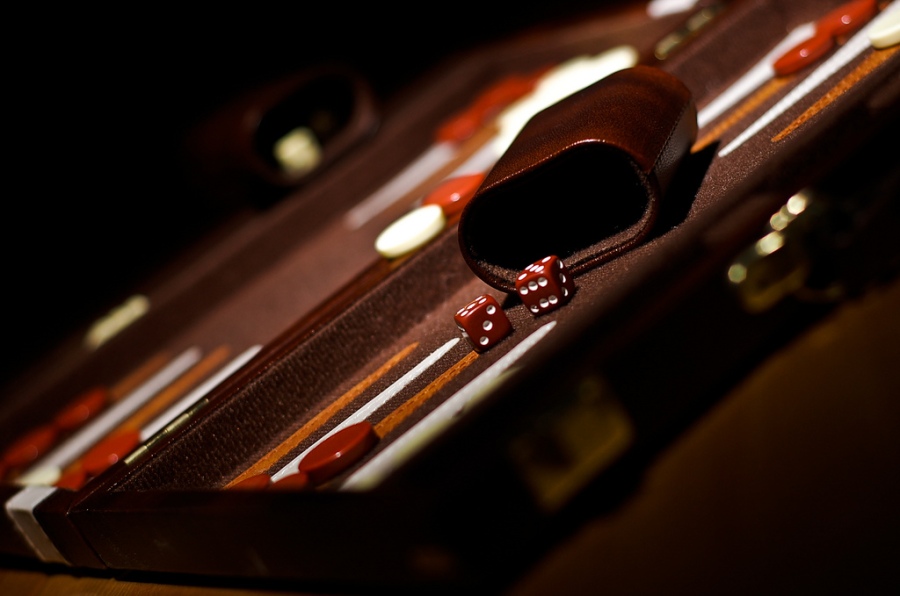 There are many games with an element of luck – games with dice, cards, dominoes or letters. Some people believe these games are “worse”, unworthy of study and you can’t by a true master in such games because everything depends on luck. I would like to refute this image. Games with the random element can be very interesting and they can build your brain, but in a different way than purely strategic games. Besides in practice, even in games with no random elements, there is some element of luck.

Game with a random element. What does it mean?

In my opinion, roulette, jackpot or lottery-games are not real games. They are only series of draws after placing bets. What I call “a game” is when a player can make any decisions affecting how to use the results of draws. Take card games for example (eg. Ecarte or Whist). The player gets random cards, but he (or she) can decide the order of playing, replacing certain cards etc. In games with dice, player does not know what number die will show, but he can make decisions –  which pieces to move and in what direction (as in the game of Malefiz).

In other words, in the real game, a player can make decisions on how to use the good luck and the bad luck. Even if this decision can be reduced to a choice between two or three possibilities, it’s a real game.

How much luck in the good luck?

The severity of a random element can be different in different games. For example in Scrabble player draws seven tiles with letters and may create a lot of words on quite large board. In this game very much depends on the decision-making process, and today there is no doubt that Scrabble is a serious mind sport. The same is true for contract bridge. Bridge player collects and analyzes a lot of information during bidding and play. He must make many decisions.

And what about simpler games such as dominoes? In this game, a player has a choice between two, three, sometimes four possible options. However, there are players who can nearly always choose the good option as well as those who usually choose wrong. Good players generally perform their actions after deeper thinking process. They are trying to anticipate further situations that may arise in the game.

You have to know how to use your luck

If you often play games with a random element you probably noticed that there are “always lucky” people.  In fact, such people do not have more luck than you. They’ve just developed such strategies that allow them to maximize the benefits of good luck. Such people can also minimize losses in case of bad luck. In the game of Backgammon a lot depends on the die roll. But there’s no man who always gets two sixes in every turn (without cheating). In practice, each player will get some bad, some good and many medium die rolls. The better player will use his rolls better.

Of course it is always possible that someone will be really lucky or unlucky. That’s why games with a random element are always played as a series of rounds. The card games have usually a few hands. In the game of Backgammon there are matches consisting of several games. And to win a match you have to reach a certain number of wins. Thanks to match system random element loses its importance and skill becomes more important. This is even scientifically proven!

Early 2015 researchers from the University of Alberta invented a piece of software named Cepheus. This program is simply perfect Poker player. It was playing with itself millions of hands and finally developed the perfect strategy. You can say that Cepheus is the electronic equivalent of a player who never gets tired, it’s not susceptible to bluff and played the entire decades. This player does not win each and every hand because it’s not possible in Poker. However, it will always win series of hands. Even if he gets worse cards he is still able to win, or at least we will break even.

Note that poker is a game in which the random factor is of paramount importance. Although it is impossible to play better or worse, and a strong algorithm is able to overcome people. The computer cannot be lucky or unlucky, but a computer can play better.

How games with an element of luck develop your mind?

After this brief introduction, we can go to the point. Games of skill and luck can develop your mind. They will also develop your character and may bring educational benefits. I prepared a short list of mental skills and character traits needed in such games.

As you can see there are many things to learn.

Life is like a game… with a random element

I used to say that life is not like Chess or Checkers. Life is just like a game of skill and luck – you never know what you’ll get, but you have to finish the game. If you are unlucky three times in a row and you stop playing, you simply give up. If you’re counting on getting lucky and you are not careful, you’ll lose despite good luck.

For me, this is a very important philosophical aspect of the games of skill and luck. They are just like life. In life, we have to accept with what fate brings to us.

Chess or draughts players like to say that win in their favorite games is always the achievement of better-trained mind. Really? Do you never win with a better player just because he had a bad day or had a tooth ache? Do you ever make moves that initially seemed stupid, but your good luck turned them into something good? In fact, your win or lose can always depend on luck. The question is whether we are able to accept this? If not, games with random elements can teach us to accept this fact.

The author of the photo in a header is Ryen Hyde (Creative Commons Licesne).