I think everyone knows what domino is. Often we treat dominoes as blocks for children, a simple toy used to learning to count. Sometimes we play with kids because this game seems simple. In my country (Poland) it’s rather unusual to see adults playing dominoes. What a pity! This game is more addictive than you think, and besides, it has a fascinating history. You can play many games with one set of domino tiles, just like you can play many games with one deck of cards.

Word “domino” probably comes from the Latin word “dominus” meaning “lord”. Probably due to the fact that the dominoes were popular among the clergy. Domino games were also popular in places where puritanical tendencies prevailed. Card games were considered as “immoral” and so they were replaced by dominoes.

One legend attributes the invention of the dominoes to monks from the Montecassino Abbey. Surely this is just a legend because a history of domino games is longer.

English mathematician Rouse Ball claimed that dominoes were already known by ancient Greeks, the Hebrews and the Chinese. It’s possible. A set of domino tiles considered as the oldest was found in the tomb of Tutankhamun in the ruins of Thebes in Egypt. Today you can see in the museum in Cairo.

In China, Domino is known at least since XIII century as “gwat pai” or “tim pai” or “nga pai”. Maybe it was known earlier, but first mentions about the game can be found in the written documents from the 13th century. Chinese domino is a bit different than European, but it still inspired by six-sided dice. It was used for various games like “tien gow” or “pai gow”. The first of these games can be played also with dice.

Chinese dominoes are very interesting. One set = consists of 32 tiles (bones). Some of the bones have their specific names, and besides some of the spots (pips) are red. There are also special sets of tiles for special games. For example, set for a game called 挖 花 resembles mahjong tiles. There are also tile sets with characters similar to Chinese Chess (Xiangqi).

Some say domino was imported to the west by Marco Polo. Some sources say that famous traveler “spread knowledge about the game” in Europe. But Marco Polo lived in 13th and 14th century. First mentions about Chinese domino comes from 12th century. Domino probably was known in Europe later, in the 18th century. It appeared in Italy first, and  Of course, European dominoes has been transformed to better fit our culture.

Double-six domino (with 28 tiles from 0-0 to 6-6) is most popular today.  It’s relatively easy to buy double-nine domino (from 0-0 to 9-9). There is also a double-seven domino (known in Russia), double-eight (known in the UK and Germany), even double-twelve, double-fifteen and double-eighteen (sometimes used in a fairly popular game of Mexican Train). Additionally, you can use doubled sets in some games. This creates a lot of possibilities!

Dominoes sets may be different, and they can be used in different ways. In many games tiles (bones) are laid on the table and they form a line, but that’s not a rule. As already mentioned, in some countries dominoes replaced playing cards and some domine games resemble card games. You can even play some card games with a set of domino tiles.

Because of the way the game is played, we can distinguish four types of domino games.

I want to describe many domino games in the next articles. Now let me show you the simplest game often referred to as just Dominoes. It’s so called “Draw Game”. In my country (Poland) this game is known as “traditional domino”. It’s really simple in terms of rules and strategy. 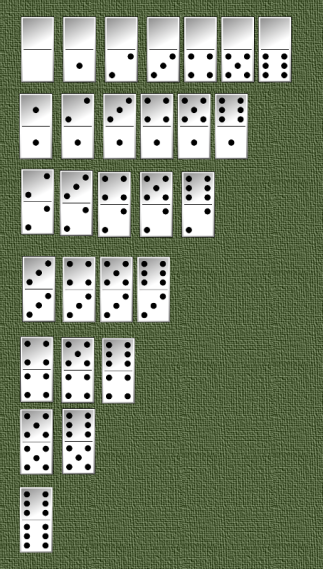 Building a line of play

In one turn player puts one tile on the table. He can extend the line of play with one tile at one of its two ends. Tiles are touching each other with shorter sides and adjacent tiles have equal values on “connected” halves. For example, 2-3 can be added to tile with 2 pips (from one side) or to tile with 3 pips (from the other side).

Doubles are played crosswise and they touch other tiles with their longer sides.

In the situation shown in the image below, there are already 10 tiles played. The next player can play a stone with 2 pips on the left side or a tile with 3 pips on the right. Note that doubles (4-4 and 6-6) are played crosswise.

The game often leads to a situation when a player can not play any tile in accordance with the rules of the game. In such situations, the player draws tiles from the boneyard until he finds one which can be played.

If there are no bones in the boneyard and the player can not play – he/she passes.

The aim of the game and scoring

The aim of a single round is to discard all tiles from the hand by lining them on the table. Round ends when one player reaches this goal. Winner (a player who got rid of all bones) receives as many points as the total remaining pip count of the losers’ hand.

It is possible to block the game (when none player is able to play tiles).  In this situation, the player with the lowest pip count is the winner. The score of the game is the pip count(s) of opponent(s) score minus pip count of the winning player.

The game continues in the next rounds until one player reaches a certain number of points (usually 100). Some people use cribbage boards to count points.

Block game and other variants

Rules of drawing tiles from the stock can be different. Some people play in such a way that the player who got rid of the stones from the hand must always draw fresh stones. In this variant winning a round requires discarding all tiles in hand after emptying a boneyard.

There is a variant without drawing from the boneyard and it is called “block game”. A player who cannot place a tile just passes.

You can also determine that a player can draw only 1 stone and passes if he still can not play. You can also limit drawing to two stones.

Besides you can play draw game with doubled domino set (2 x 28 tiles) or dominoes other than double-six, for example, double-nine.

Why domino games are so nice?

Dominoes seem simple and not interesting, but this is one of the “immortal” games. In some countries, you can see many people playing even on the street. Why?

This game seems simple, but after few games, you can discover how addictive domino can be. After many games, you start to play more consciously and you realize that there are some strategies increasing your possibility of winning. I wrote, that playing such games with the random element can develop your mind.

Polish engineer and science popularizer Szczepan Jeleński in his book “Lillavati” writes about recreational math. He encourages to play domino games and quotes anonymous domino lover. The quote below fully reflects the beauty of dominoes.

Domino game, judged superficially, may seem a little refined; its simplicity do not predispose people favorably; but this is a nice surprise when in closer contact with it you find a lot of interesting combinations and deeper ties. You could compare dominoes to a modest scholar, whose merits are unnoticed at first, but when we start to know him better we appreciate him and love him sincerely. There is in this game – just like in chess – an element of nobility: it is not suitable for gambling, it’s not fueling greed, it lives for honor and honor is everything to it.

The description above does not fully correspond to the truth. There are gambling games with domino tiles, but it doesn’t matter. This game really has virtues mentioned above. You should just play and find them.

Other articles on Domino

If you want to try domino games you can buy nice Domino sets on Amazon. By buying it you support the creator of this blog.