I wrote about 64-square  draughts variants and about three games from orthogonal draughts family. Every time I mentioned that “draughts” is not one game. It’s a group of games with some common features. So far I described only games played on a 64-square board, although with very different rules. Now it’s time to present games on larger boards with 80 squares (8×10), 100 squares (10×10) and even 144 squares (12×12).

Draughts on larger boards can use same rules as games on 64-square board. But increasing the board is always connected with increasing the number of pieces. This increases the complexity and duration of the whole game, makes it less schematic and less predictable. For this reason, draughts on larger board are often games played on tournaments. They are treated as serious mind sports such as Chess or Go, which does not mean that traditional 64-square checkers are “less serious”.

I will describe few games on the larger boards, but as a Pole, I must particularly single out Polish draughts, also known as international draughts. In my personal opinion, this is the most beautiful variant of draughts.

It’s funny but Polish Draughts is not very popular in Poland. We call them “Polish” probably because they were invented by a Pole.

Polish Draughts is also called International Draughts or International Checkers. This game became a real mind sport relatively early. The first world championship was held in France in 1885. It was won by Alfred Dassaut. Initially, the world champions were mainly French, but later champions were representatives of the Soviet Union, the Netherlands, and Russia (after the collapse of the USSR). The current world champion is a Russian Aleksandr Grigoriev. Well … we all know that the Russians are serious about mind sports.

I’m writing a tutorial on International Draughts strategy. But of course you have to know rules of the game first.

The game is played on the dark fields of the chequered 100-square board (10×10). There are 20 white and 20 black pieces set on the first 4 rows on the side of each player. The board is arranged in such manner that the lower left corner is dark.

The board and the initial setting of pieces are shown in the picture below. 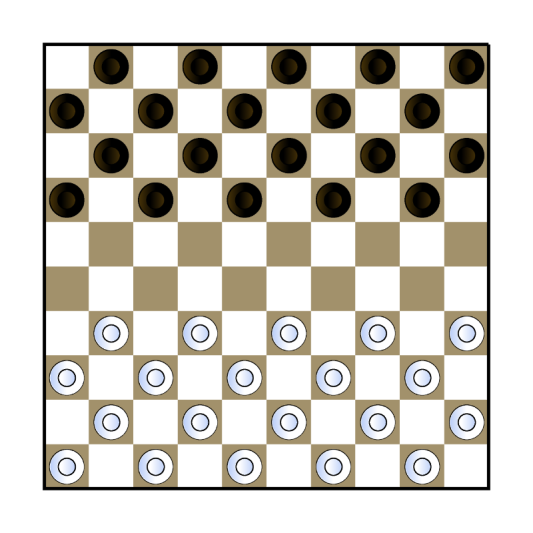 This game uses so-called International Rules, just as in Brazilian draughts. Here are the rules.

International (Polish) draughts are great and extremely addictive. Despite the relatively simple rules, the game leads to very complex and surprising positions (thanks to the increased board).

Soviet Checkers is probably the only variant of checkers played on a rectangular board. It was invented by a man named Nikolai Spantsireti around 1930. V. N. Russo mentioned about this game in his book.

Soviet Checkers is nothing but Russian checkers (Shashki) on the increased board (8×10 instead of 8×8). The number of pieces is increased so there are only two unoccupied rows of fields. To play you need 15 white pieces and 15 black.

Initial setting is shown in the image below.

The rectangular shape of the board creates an interesting situation. There is no main diagonal line in this game, which normally has big strategic importance in draughts games.

As already mentioned, the game is played according to the Russian rules. They are nearly the same as the international rules with two exceptions.

Canadian checkers is a game played on a huge board with 144 fields (12×12). The idea of playing on such a large board is known from the beginning of the XIX century. The invention of Canadian Checkers is attributed to the French settlers of Quebec (Canadian province).

Rules of the game are the same as International (Polish) Draughts. That’s why some people call this game “Major Polish Draughts”.

There is no need to explain the rules of the game since they are identical to those described above for International Checkers. I will only mention that the game is played on the dark fields of the 12×12 board. The board is arranged in such manner that the lower left corner is dark.

The game is played with 30 white and 30 black pieces. At start pieces are set just like in most draughts games – there are only two rows of free fields between the “fighting armies”. This is shown in the image below.

Friesland or Frisia is a province in the Netherlands that has its own culture, its own language and a special mind sport – Frisian Draughts. This game has been known for over 400 years. Its fans think that development of International (Polish) Draughts was driven by Frisian draughts. These two games vary considerably, but they use same board and the same initial arrangement of pieces.

Perhaps in 2018 first official Frisian Draughts World Championships will be held. Aleksandr Grigoriev – the current world champion in international draughts – already tried to play this game. Who knows? Maybe this sport is able to gain big popularity? At this moment you can find information about World Championships on Frisiandraughts.com, and you can also find an e-book on the rules and strategies.

Let’s move on to describe the rules of the game. As already mentioned, the board, the pieces, and the initial setting are the same as in Polish DEraughts. There is a 10×10 board and 20 men on each side.

What is special in Frisian draughts is a capturing. Men can move only one square diagonally forward but can capture (shot)  diagonally, vertically or horizontally.

Diagonal capture (diagonal shot) looks just as in the other draughts games. You must jump over the captured piece diagonally and land on the next free field behind it. 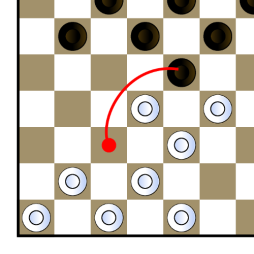 In other words, you can make a shot when three consecutive dark squares (regardless of direction) if they are occupied as follows: your own man – enemy man – empty square. Remember that game is played only on dark fields.

In Frisian draughts, just like in all draughts games, captures may be combined so it’s sometimes possible to jump several pieces in one move. You can change the direction of jumps so in practice you can make quite complex shots comprising vertical, horizontal and diagonal jumps.

An example of such a combined shot is shown in the picture below. 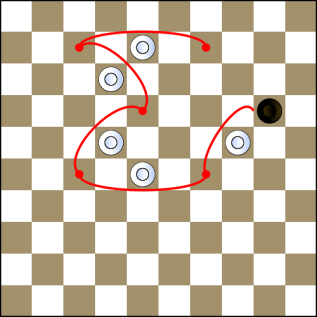 A man reaching the last row becomes a king. We say it is crowned. A king moves any number of squares diagonally forwards or backward, just like in international draughts. 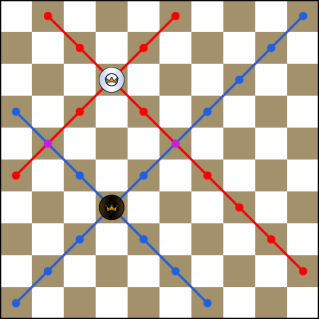 King may make diagonal, vertical and horizontal captures. King’s shots may be made “from a distance” – no matter how many fields are between King and captured piece. And king can land on any field behind the captured piece.

The image below shows the possibility of dual capture by a king, using the landing on the second field behind the first captured man. Diagonal capture is followed by a horizontal capture.

Capturing is always mandatory, as in all draughts games.

Pieces are removed from the board after completion the capture (shot). In some cases, this may reduce the number of captured pieces.

In Frisian Draughts, there is an obligation to perform the capture with the maximum “value” . The king is worth more than one man but less than two men. So if you can capture a king and a man or three men, you should kill three men.

Frisian Draughts are really fascinating. So bad they are so little known.

Other draughts variants with increased boards

Just like in the case diagonal draughts on 8×8 board there are more variants on larger draughts games that differ in small details from most popular variants. For example, there is a draughts variant from Ghana played on a 10×10 board that resembles Polish draughts. However, in this game, there’s no obligation to perform the most valuable capture. In addition, in the Ghanaian Draughts accidentally passing up a king’s capture opportunity leads to forfeiture of the king. In this variant, you lose if you are left with a single piece (man or king). In the Ghanaian draughts, the board can be arranged in such manner that the lower left corner is white (not dark).

There is also a game called Malaysian Draughts, also known as Singaporean draughts. This game can be played on 12×12 or 10×10 boards (very rarely on the 8×8 board). In these variant failing to do capture results in forfeiture of the piece which has capture opportunity (so-called huffing or huff rule). In the Malaysian Draughts, the board can be arranged in such manner that the lower left corner is white. The first move can be made by black or white – this is not fixed.

Read my other articles on draughts games. Links below.