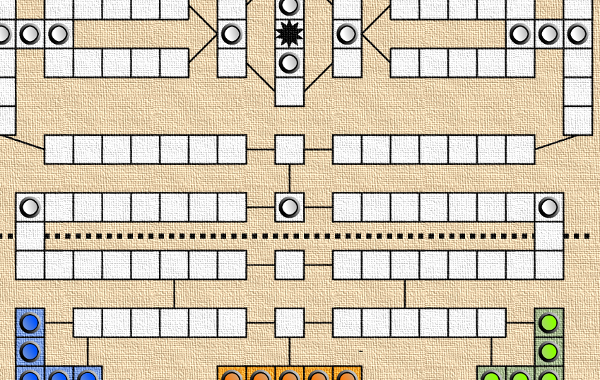 If you are looking for a relaxing but not too easy game to play with friends, Malefiz is a great choice. Unfortunately, the basic variant is for 4 players only. What to do if you gather a larger group of 5 or 6 people? No problem. There’s a variant on a larger board!

Game of Malefiz is also known as “Barricade“. It was clearly developed on a basis of Pachisi (ancestor of Ludo). Its creator – Werner Schöppner – changed the board and introduced an additional type of pieces, so-called barricades. Thanks to this he designed a game that is funny and quite complex strategically. You can play it without getting bored.

I’ve already described the basic variant of Malefiz for 2, 3 or 4 players. In this article, I describe a variant for 5 or 6 players.

Board, pieces and die

To play Malefiz for 6 you need a board like shown on the picture below. One square in the middle of the board is specially marked (in this case by a star). Colored squares on the edges are also important. 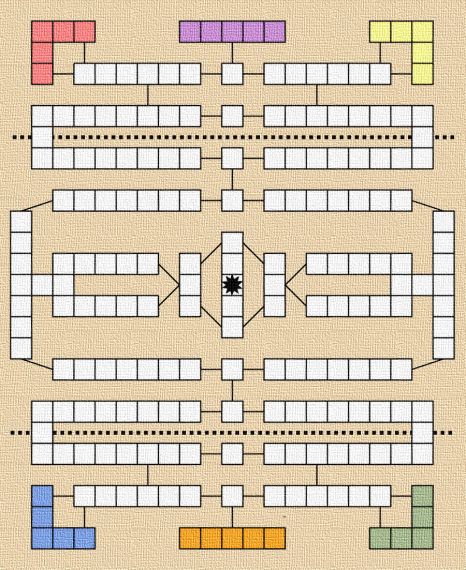 In addition, you need pieces and dice to play.

Theoretically, you can use this board with 2 or 3 players only, but playing in such a small group (up to 4 people) doesn’t make sense. If there are 4 players or less, it’s better to play the basic variant of the game.

If 6 players are in the game, there are simultaneously 46 pieces on the board (30 players’ pieces and 16 barricades pieces). That’s what makes this game funny!

Initial setting is shown in the diagram below. Note the white barricades setting. Players’ pieces are placed on colored starting squares. Each player (in this case Yellow, Green, Blue, Red, Orange, and Purple) has its own starting positions. 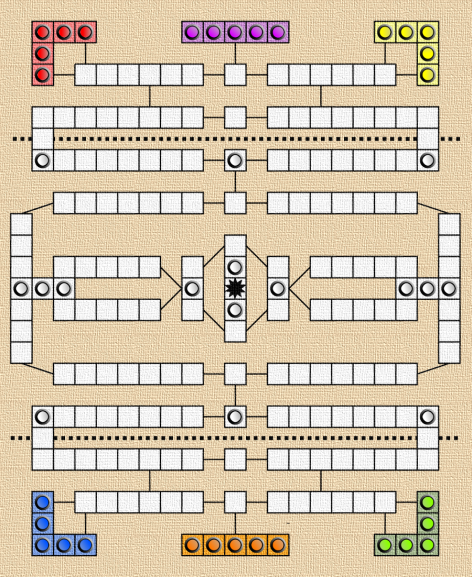 You also need one die to play. There is a variant with two dice (see below).

The aim of the game

Malefiz is a race-type game. Players race to the field in the middle (marked with the star). The winner is the first player who gets one of his pieces on this field.

Of course, there are some important rules in the race.

Players take turns sequentially. In one turn player rolls a die and moves one of his pieces in any direction for as many fields as shown on the die. 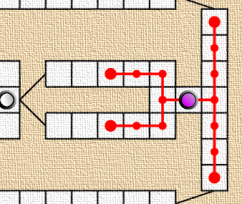 If there’s another player’s piece on the way, it can be simply bypassed (or it can be captured – see below).

Note: It’s not allowed to move forward and backward in one move. You can turn, but you can’t make a u-turn to make your move shorter.

Note II: In the first move, the central square of all starting squares counts as a first.

If there’s a barricade on the way chosen by a player, this barricade cannot be passed. It must be removed first.

Removing a barricade occurs when a player lands one of his pieces on the top of the barricade (with an exact throw). The player who removes a barricade, have the right to place it on any chosen square on the board, with the exception of the fields behind the dashed line. This rule is intended to prevent the possibility of blocking opponents’ pieces just at the start.

If a player standing before barricade throws a number of points not allowing to remove it, he/she may approach to the barricade or move back.

Some people like to play Malefiz with two dice. In this case, after each turn player moves not one, but two of its pieces. The game becomes more dynamic and players have more capabilities of moving.

Why it’s worth a try?

I mentioned earlier that Malefiz is relaxing but at the same time interesting. The rules are simple, but you have to think a little over tactics, and there is a funny turmoil on board when playing with 5 over people. This game is good both for adults and children. The former do not get bored, the latter should not discourage quickly :-).