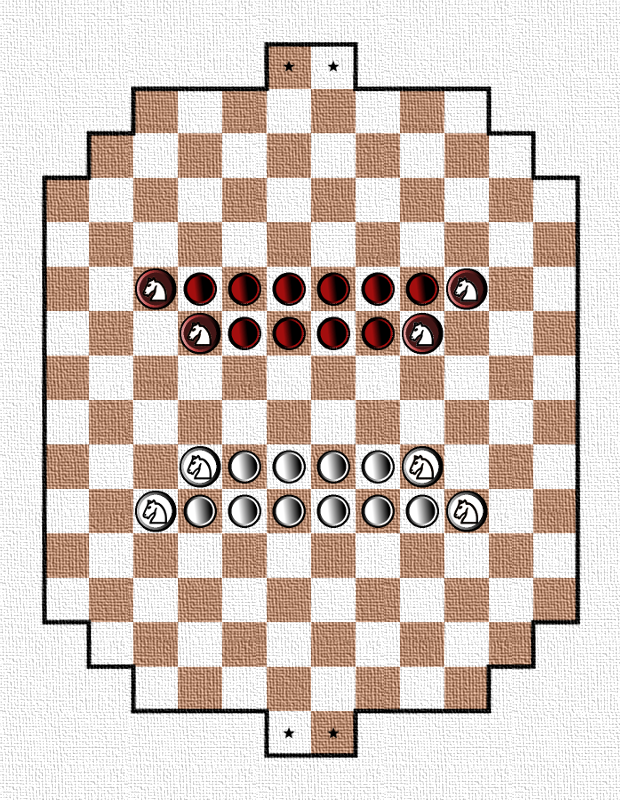 Recently I wrote that Chess and Checkers are two very different games with no common roots. Despite this, there were people who tried to merge this games and results were fascinating. One of those people was George Swinnerton Parker (1866-1952), who created a fantastic game of Camelot. It’s not popular today, but believe me – it’s an underestimated jewel of board games.

George Swinnerton Parker is quite an important figure in the history of games. He showed a passion for games when he was young and he designed new games with enthusiasm. He believed that games do not have to emphasize morals or values but they should bring joy and entertainment. And so games he designed were funny, dynamic and interesting. Perhaps this contributed to the success of companies founded by Parker (Geo. S. Parker & Company and later Parker Brothers). Of course, those companies were game publishers.

Parker Brothers is known for releasing Monopoly in the current version, but Monopoly was not designed by Parker. He developed other interesting games like  Ivanhoe, Speculation or Great Battlefields. War in Cuba or Klondike, but in my opinion, one game is the most interesting. It was a purely strategic game of Camelot.

In 1882 Parker wanted to work on an abstract strategy board game considerably more varied than Checkers but not so complex as Chess. As I wrote before, chess and checkers are different games with no common roots, but Parker has really managed to create something between chess and checkers. Initially, the game was called Chivalry.

The first version of the game was released in 1887. It was not very popular but in 1930 this game was released with refined rules (under the name of Camelot). Since then game enjoyed its greatest popularity until the end of the 50s in last century.

Publishing of Camelot was discontinued in 1968. Game was once again reissued under the name Inside Moves in 1985, but finally discontinued year later.

After all Camelot is not totally forgotten. In 1999 The World Camelot Federation was formed. An international non-profit organization with a goal to preserve and popularize this wonderful game. WCF organized world championships (tournaments at the turn of 2008-2009 and 2002-2003.). I honestly do not know if the federation Camelot still works, but the website is still available.

Oh! And there are computer programs that can play Camelot!

Enough of this history! Let us explain how to play.

The general idea of Camelot

Camelot is an abstract strategy board game for two players. Players have two kinds of pieces of their color (Dark or White). The aim of the game is to move pieces into opponent’s Castle or kill/block opponent’s pieces.

Board and pieces to play Camelot

To play Camelot you need a special board with 160 fields, shown in the image below. Note that on each side of the board there are “niches” made of two fields marked with stars. These niches are called Castles. The castle belongs to the player whose army stands in front of the Castle.

Camelot is a game for two players. White makes the first move, then both players make moves alternately.

In Camelot, pieces can perform 4 types of moves.

The latter type of move is reserved only for Knights.

When making a plain move a piece (either Knight or Man) may move one square in any direction. This is shown in the image below. 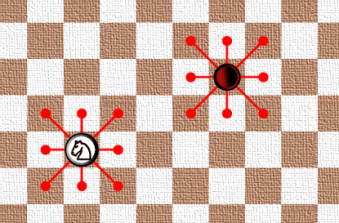 The Canter is a move that accelerates a game. It is simply a jump (in any direction) over a friendly piece (either Knight or Man). It is similar to capture in draughts but pieces cantered over are not removed from the board. Note: Canter can be made only over your own pieces. It is not possible to jump over enemy piece without capturing (killing) it.

A player can canter over many pieces in one move as shown on the image below. A player can change direction during a Canter.

Note: Canter is not a mandatory move. A player can jump over one of his pieces or over many pieces. He is not compelled to canter as far as possible.

Note II: Player may not begin and end the Canter on the same field

In Camelot capturing is made by jumping in any direction over the enemy piece. In result of such move, an enemy piece is killed and it’s removed from the board.

It’s possible to capture many enemy pieces at once, making few jumps in a row. In the situation shown in the picture below red Man kills white Man and the Knight.

Capturing is mandatory and if it’s possible to make more jumps after the first jump, a player must perform all these jumps (so the whole possible “capturing sequence” must be completed).

Note: There is no obligation (or even possibility) to complete the jumps sequence if a piece has jumped into the opponent’s Castle (rules for entering the castles are described below).

Uwaga II: If there are many possibilities of jumping (capturing), a player chooses any sequence.

The Charge (only for Knights)

A charge is a move combining a Canter and a Jump (necessarily in that order). The charge can be made only by a Knight, so he can first canter over friendly pieces to jump over the enemy piece(s) at the end of the move.

A player can not capture first and then canter.

The image below shows an example of the charge. 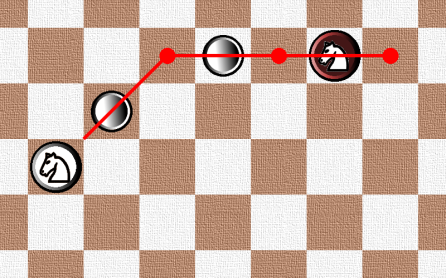 Note: During the Canter and Charge a piece can jump several times over the same friendly piece and therefore a charge can look like this one on the picture below. 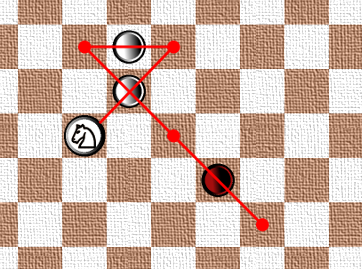 A charge is not mandatory, but if the canter of a Knight brings it next to an enemy piece that can be jumped, this jump is mandatory.

Capturing sequence in charge must be completed. I mean if it’s possible to make more jumps after the first jump in the charge, a player must perform all jumps.

Additional rules apply the moves when a piece enters it’s own or enemy castle.

A player may enter his own castle only by making a jump or charge. It’s not possible to enter your own castle by cantering or making a plain move. If a player jumps into his own castle but capturing sequence may be extended (there are still possible jumps) jumping must continue as part of that same move (out of his own Castle). A player who has jumped into his own Castle, and he was unable to continue the jumping out, must move that piece out from his own Castle in the next turn (with no exception). The player should, if possible, leave the castle by jumping out (instead of plain-moving or cantering out).

If players piece has entered the opponent’s Castle it may not come out. However, it may move from one field to another in the castle. Such move (a “Castle Move”) can be made twice during the game.

The aim of the game

In Camelot, there are three different ways to win a game

First and basic – player wins if he moves two of his pieces into his opponent’s Castle.  It is not important whether these pieces are Men or Knights. Such a situation is shown in the picture below.

The second way – player wins if he kills all enemy pieces and he still has at last two of his own pieces.

The third way to win is to block the opponent’s pieces so that he could not make a legal move.

The drawn game is possible – for example when two players have only one piece on the board.

This game is amazing. You just have to try.