My article on Reversi and Othello was quite popular. I know some people found it because they were looking for information on Othello strategy and tactics. These people already know how to play, but they don’t know know how to win.

Othello is one of my favorite board games. I spent some time playing, learning strategies and tactics and analyzing my own mistakes. I want to share this knowledge in series of articles. Here’s the first one.

I assume you know Othello rules. If not, please read my article on history and rules of the game. I emphasize that my articles are about Othello – modern, standardized version of the Reversi on 8×8 board. In my articles game pieces are called “discs” (it is common term in books and articles on Othello).

Perhaps you tried to play Othello with a human player or with computer. Perhaps you lost. Maybe you had the impression that you’re doing well but at the end you lost. How did this happen?

Basic problem – the aim of the game

You can’t win at Othello if you don’t understand the aim of the game. Winner is not the player who captures many discs throughout the game. The winner is the Player who ends the game with the highest number of own discs.

Most beginners make the mistake of capturing the maximum number of discs in each move. It’s not advisable. It’s good to capture the large number of discs, but when the game comes to an end. You can easily loss discs captured in first moves.

Discs lying on the board are usually unstable. They can change color (and ownership) many times during one game. That’s why it’s important to attack at the right time. With premature attack you just generate a lot of unstable discs, and those discs will be flipped at the end of the game by your opponent.

Only some discs can be stable – it’s impossible to capture such discs. They are of great importance because they can be a basis to build victory

You probably already know that capturing discs in Othello requires cathing (sandwiching) enemy discs in vertical or horizontal or diagonal line, as shown on the picture below.

It is impossible to catch discs in corners because such discs are adjacent to only three fields (with no possibility to create catching position). If you put your disc in the corner it will be always stable. 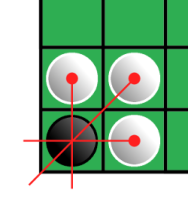 Discs are also stable when

Example is shown on the image below. There are 17 stable white discs so… all white discs are stable.

Those white stable disks are totally immune to attack. They will not change color to do the end of the game. What’s more, it is possible to use them as a base for further attacks. Black discs are unstable because they do not adhere to a corner.

One of the goals of the good player is to achieve a large number of stable discs. It seems simple, but when you play with strong opponent, he also tries to win a corners and build stable discs. So what can you do to win corner first?

Othello as a “defensive” game

Renowned Polish chess player Savielly Tartakower said that the winner of the game is not the one who plays better, but the one who make less mistakes. He also said that “The blunders are all there on the board, waiting to be made.”

This applies also to Othello, even more than to Chess. In games like Chess player must attack to win. The passing of the move would be a great loss. But in Othello it pays to wait and wait. Sometimes Othello player would like to make no moves, but of course he must play if there is such possibility.

How to not lose a corner?

It’s really easy to lose a corner if you play in one of 4 fields adjacent to corner diagonally. Those fields are shown on the image below.

If you play in one of these fields your opponent will be able to capture your disk by playing just in the corner. Some authors of books about Othello call these fields “X-squares”. It’s dangerous to play there and mostly you need to avoid this.

You can also easily lose a corner by playing in a field adjacent to the corner vertically or horizontally. There are 8 such fields on the board.

Playing in these fields can be dangerous, especially when there are yours and enemy pieces near the edge of the board. Sometimes it’s necessary to play in these fields but it must be done with caution.

If you play with strong opponent he will try to force you to play in dangerous fields. How he can make it?

Look at the position on the picture below. It’s Black’s turn. He has only one legal move. He must play in X-field marked by a black star. Black could avoid this if he had one other legal move. But now he must play in the X-field and in the next move White will take the corner.

The question is how to avoid such situations? The answer is…

One of the general rules of the strategy is to not let your opponent to dictate your moves (this rule applies to any game, not only Othello). Therefore you should have as many legal moves as you can. In Othello this is called mobility. In the initial  phase of the game mobility is more important than capturing enemy disks.

In the situation showed below White has only three discs. But White is very mobile. He can play in all fields marked with white stars. He has 10 possible moves. 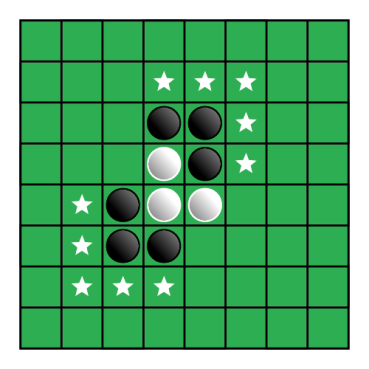 If it would be Black turn to move, he could play in only four fields (marked black stars). Black player is not mobile. During the game White will be able to lead Black by the nose as long as he will be able to reduce Black’s mobility.

Here are the basics of Othello strategy. You must wait, you must maintain mobility, get the corners and build a stable discs. Unfortunately, if you play with strong opponent, he will also try to achieve the same goals. Outsmarting your opponent will require more advanced methods. I’ll describe them soon.

Next parts of the tutorial:

One thought on “How to win at Othello? Part 1 – Strategy basics, stable discs and mobility”