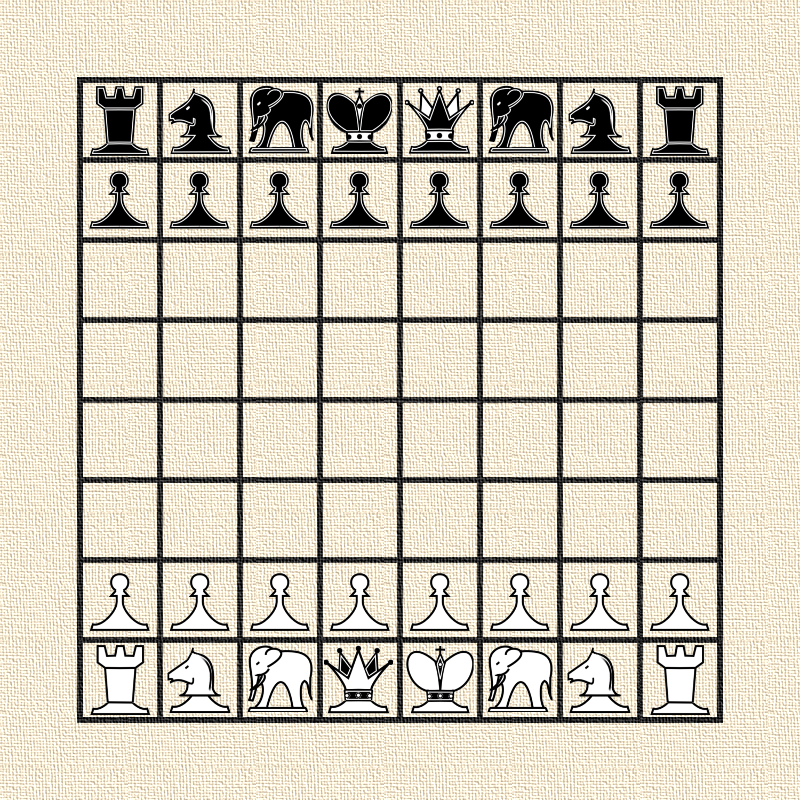 I described many different types of draughts (checkers) stressing that draughts is not one game. It’s a family of games with common features! In compare to draughts Chess seem to be a single, complete and polished game. But… it only seems to be. In fact there are many chess games which grown in parallel with the so-called classical chess. Understanding the common characteristics of chess games will be easy if you look at the ancestor of these games – the Indian game of Chaturanga.

Game of Chaturanga could be developed in the 6th century AD. It was born in the Gupta Empire (India) and later it came to Persia to give rise to a game of Shatranj (the father of modern chess). In other parts of the world other chess game began to rise – Shogi in Japan, Xiangqi and Janggi in China, Sittuyin in Burma, Makruk in Thailand.

Many people believe classical Chess is very old game. People playing Chess are shown  in movies or novels about ancient or medieval times. I met with the myths of the Greek philosophers playing chess. Just myths, because Chess arose as a product of evolution of other games (and the evolution of chess alone). In Europe game of Shatranj was modified since XIII century, but in the XV century something really similar to chess was developed. Rules about stalemate were finalized in XIX century, as well as rules for castling and the rule that white moves first. Modern Chess is… relatively young game.

But the ancestors of chess are really old. Chaturanga, which is very old game, had all important features of chess games.

Many games have been build on this general rules. In older chess games pieces are rather weak and there are not too many special moves. In contemporary chess pieces have relatively strong “firepower” and there are special moves to accelerate the game (castling, promotion of pawn to any piece or possibility to move pawn forward two spaces when on its starting square).

In my opinion every Chess player should try this “oldschool chess”. That’s why I decided to describe rules of Chaturanga. With a little imagination you can play chaturanga with normal chess set.

Chaturanga – board and pieces

Chaturanga was played on 64-square board (8×8),  uncheckered in the traditional version of a game. This board is called Ashtāpada.

Sometimes you can meet boards with special markings on the fields indicated on the image below. Historians are not sure about the meaning of this markings. It is possible that they were purely decorative. There is also a theory that boards to play Chaturanga were also used to play another game with the random element, in which those markings had meaning.

In Chaturanga, just as in chess, every player has 16 pieces (so there are 16 black pieces and 16 white). Each player has a set of pieces including:

Rules of the game

Before the game start pieces are placed on the board as shown on the picture below. Infantries create a front line of each “army”. Rooks are behind them, in the corners. Horses and Elephants are closer to the Minister and King, who stay on the middle fields – Minister on the left, King on the right side. Note that the Kings do not face each other (as in chess). 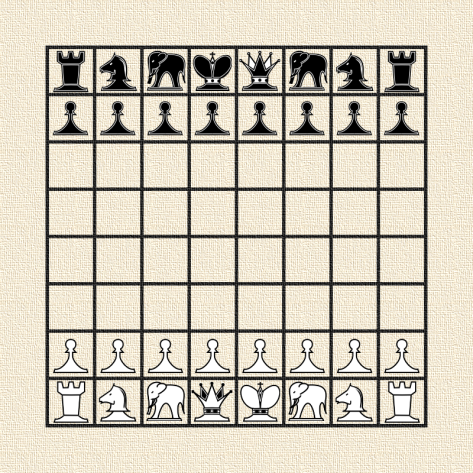 Pieces and their moves

King (Raja) – moves one step in any direction, the same as the King in Chess.

Some sources say that King had a right to make one (and only once) move like a horse (see below) but only if he was not checked earlier in the game.

Minister (Mantri) -moves one step diagonally in any direction.

Elephant (Gaja) – moves two steps diagonally in any direction, jumping over first square. This is the most common, but not the only move described in ancient literature.

According to some sources, Elephant moves differently – one step forward or one step in any diagonal direction (like silver general in the game of Shogi). There are also sources saying that the elephant moves two squares vertically or horizontally in any direction, jumping over the first square.

Rook or Chariot (Ratha) – moves any number of squares horizontally or vertically, the same as a Rook in Chess. This is a strongest piece in Chaturanga.

Note: Some sources say that Ratha (Rook) could move only two squares horizontally or vertically.

The image below shows possible moves of White and Black infantries going in opposite directions. White can just go ahead. Black can capture the white Elephant by moving diagonally forward.

Note: In Chaturanga there is no option to make double-step move when moving infantry first time (Pawns in chess have such option). Infrantries in Chaturanga can always move only one square forward.

In Chaturanga each player have one target – the enemy King. The goal is to checkmate the King, therefore each player must protect his King from attacks. This duty is realized in the condition of check.

Check occurs when King is under threat of capture on opponent’s next turn. In such situation threatening (checking) player can say “check”, and the checked player must get out of check by making a move that prevents King from capture.  It can be done by

In the situation shown below the black King is checked by the white Rook (King could be captured in the next turn). Black player has a duty to protect the king. It can be done by… 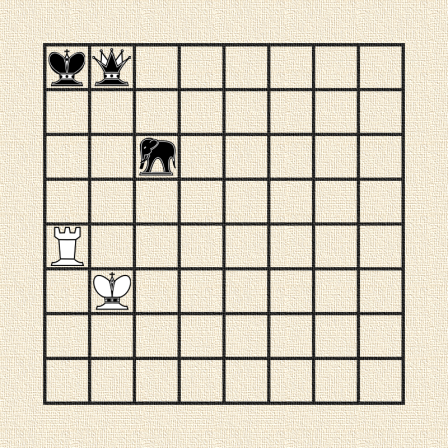 The obligation to defend the King can have great tactical importance. In the situation shown below black Elephant checks the white King and at the same time attacks the whitet Rook. White player can’t move the Rook. He has a duty to move King to runaway from the check. In the next move Elephant can capture the Rook.

Note: Players cannot make any move that puts their own King in check.

Aim of the game – checkmate

As already mentioned, in Chaturanga the aim of the game is to checkmate enemy King.

Checkmate is a game position in which a player’s King is in check and there’s no way to escape from the threat.

Checkmate example is shown on the image below. Black King is threatened with capture from Rook and Horse. All the fields around black King are controlled by the Rook, Horse and Elephant. There’s no way to escape. 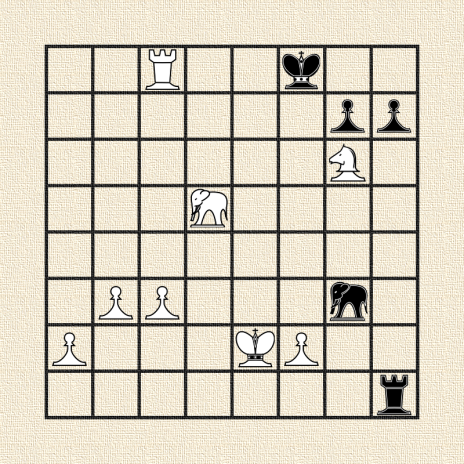 In Chaturanga it is possigle to win without checkmating the opponent. You can win by capturing all enemy pieces except the King (which can never be captured). Bare King is not able to win alone and he can’t defend himself. But in Chess player with a bare King can still play for a draw. In Chaturanga there is no such possilibity. Lonely King is lost.

Stalemate is also possible. It is a situation where the player whose turn it is to move is not in check but has no legal move because all squares around his King are controlled by opponent’s pieces. Some sources say that in Chaturanga stalemate was a win for a stalemated player (which would be quite original principle, given that in other chess games stalemate means draw or win for a player who delivered stalemate!).

Some sources say that in Chaturanga there were no rules on stalemate.

Example stalemate is shown on the image below. 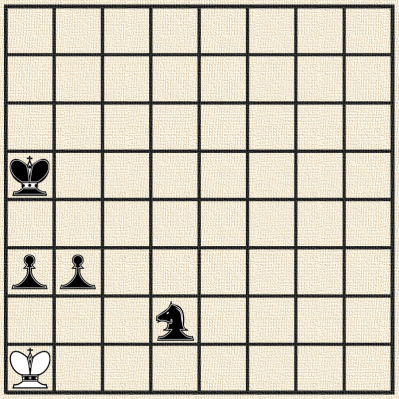 Compared to other games described on Bonaludo Chaturanga looks like … museum specimen. But this is well preserved specimen. You ca play this game and you can do this using even a normal chess set. Just assume that Bishops are Elephants and you can play.

You can play just for fun, to feel the ambience of this old game. It was not so aggressive and fast as modern chess. Thanks to weaker pieces game goes slower and there is “more space” on the board. Playing with weaker pieces means you have to take care of their cooperation. I think playing Chaturanga could be an interesting addition to chess player training.

I bet Chaturanga will never become serious mental sport played on tournaments. But it will be always regarded as the doyen and progenitor of the chess family.  It will be always interesting for us because we see it as evolution phase in creation of chess – well known game strongly embedded in out culture. But i didn’t describe Chaturanga to show an exhibit put behind the glass, which can be admired from a distance. You have to try play Chaturanga if you really want to experience this game.

2 thoughts on “Chaturanga – progenitor of the chess family”