Impressive shot is a dream of every draughts player. This is the moment when you make ostensibly silly moves, and at some point you surprise your opponent with multiple jump that gives you a win, superiority or at least a King. Unfortunately making shots is not easy. To learn “shooting” you have to see how others did it in the past.

As part of the Draughts tutorial I have already discussed the basics of the strategy and the rules of notation of International Draughts. Now I should go further to discuss phases of the game – opening, middlegame and endings. Actually, in each of these phases, a shot may occur. It’s a long, multiple capture sequence preceded by a series of moves that force opponent to arrange his pieces in particular way. In Draughts forcing opponent is possible thanks to sacrifice – because capturing is mandatory.

Shots usually occur in the middlegame. They can be decisive, but one shot does not guarantee a win. There are lots of games without shots and beginners usually do not know how to make them. So maybe I should’nt discuss shots at this stage of my tutorial?

In my opinion studying shots has two advantages. This is fun and it stimulates player’s imagination. What I understand as “imagination” is not only creativity, but the ability to visualize the effects of moves. Good player is able to “move pieces in his head”. He don’t need a board and pieces to “see” how position will look after a few moves. You can’t win at checkers without this skill.

It’s best to show one example. Let’s look at the position below.

In this particular position White have a way to a certain win by capturing 5 enemy pieces, starting from field 48. Do you see how it can be done? I think you don’t, so let me show you a solution. 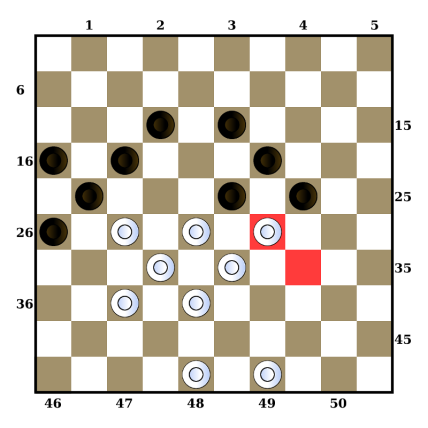 Black is forced to capture – 23×34. There’s no other possible moves for him.

Now White forces Black to another capture with 28-23. 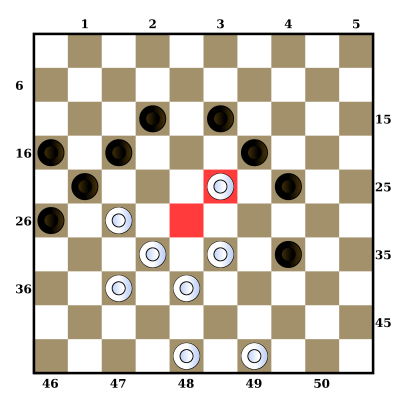 Again Black has only one possible move – 19x28x39. White loses two men and it seems stupid. 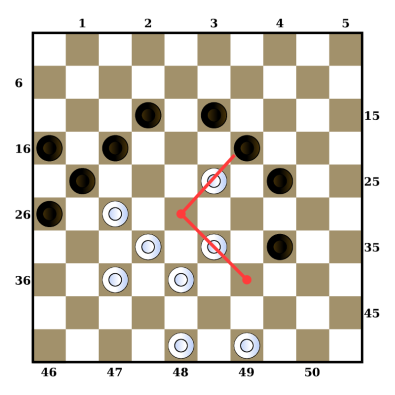 Black captures two pieces – 26x37x28. Again it’s the only possible move for him.

It seems Black is winning but in fact White rules here. And now White makes something really brilliant – 49-44.

What? It seems that Black can make a King. But wait! Black can also capture two white men (21x32x43). In International Draughts  it’s compulsory to capture the maximum amount of the opponent’s pieces so Black has to play 21x32x43.

Now White is taking a revange! He captures three pieces with one jump – 44x33x22x11.

Effect of the shot is quite interesting. There are two pieces left on the board, but it’s Black’s turn. He have two possible moves and each of them brings a certain loss. 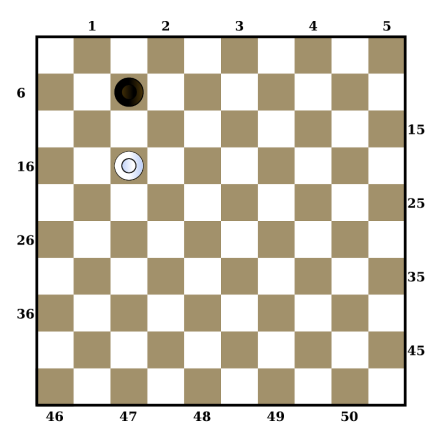 Fascinating, isn’t it? French draughts player Raphael described this shot. I’m not sure if it’s often present in a practical game, but it’s theoretically possible. Now let’s try to answer one question. How it’s made?

I must say I dislike to call shots “a shots”. In my country draughts players say they make “a combination” and this better suits for what shots really are. Shot is not only the last multiple capture. It’s a sequence of moves, initiated by a sacrifice, which leaves the opponent few options and results in tangible gain. This particular combination was – from the very beginning –  made to enable attack from field 48. This is a list of goals necessary to achieve that.

Image below shows initial position, moves of all important pieces and fields important for completing this shot. This explains how this devilish shots was made.

I have also prepared short animation that shows this combination step by step.

It’s easier to understand than to make

Thanks to this example you can understand few things.

Is there a way to easily recognize the situation where the shot is possible? Well … there are some symptoms like evenly placed gaps between the opponent’s stones. Free field in a King’s row is also important symptom but there is no one universal way to find a shot. And most often there are some ways to prevent shots.

The most important skill is the ability to build a game tree in your mind. Good draughts player must be able to imagine the effects of not only one move, but also several other moves after few possible next moves. This processes can be easier if you know many typical situations. That’s why players study openings, classic shots and some classic endings.

Interesting myth is popular among the people who don’t play checkers (and especially among chess players). They believe that there are “winning schemes” in draughts, and you have to just learn those schemes. That’s a bullshit because if there was a “winning pattern” game would have no sense and all games between champions would result in a draw. It’s true that there are some tried-and-true methods of achieving certain strategic goals, but even if you learn them all, you will not win every game. Only imagination and creativity leads to win.

Once I heard that the hardest thing in checkers is to win from a wining position. There’s a lot of truth in this. In this lesson I just wanted to show you one explained shot. In the next lessons I’ll show you many classic shots.

In this lesson you have learned a Devil’s Shot, starting from position shown below.