In my previous posts on draughts variants I described diagonal draughts, orthogonal draughts, draughts on enlarged boards and “twisted” draughts. But still I’m far from describing all checkers variants. The next chapter of this story is a game of Towers (called Bashni) and modern game called Laska.

Towers is a game from Russia and we can say it’s a Russian Draughts variant. It’s also known as Bashni (Башни) or Stowby (Cтолбы). This two words can be translated as “towers”.

The game uses an ordinary 64-square chessboard and 24 pieces (12 white and 12 black). The initial setting looks the same as in most of the checkers games on the 64 square board. 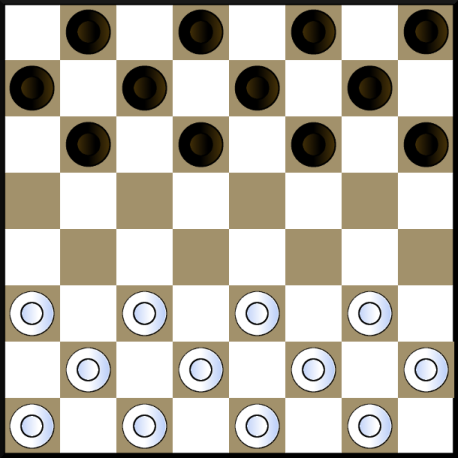 The rules are similar to those in Russian Draughts so…

Let’s see an example of capturing. In the position shown below White is to move, so he is oblliged to capture a black man. 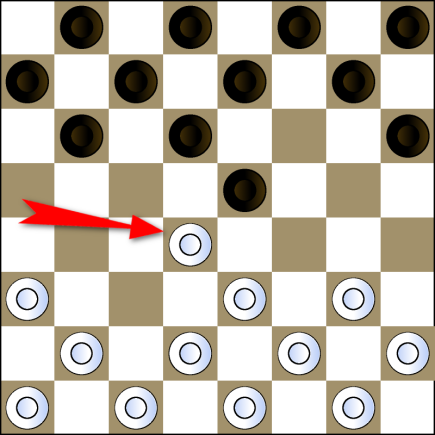 After the jump a tower is formed. The white man is the commander and the black man is the prisoner. 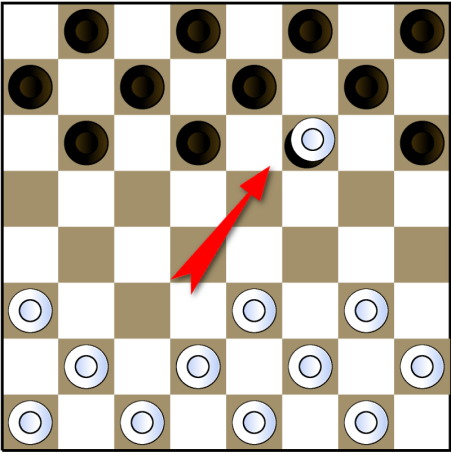 The tower is treated like any other piece. It does not aquire any new powers. It can still move one square diagonally forward and may hit the same way as a regular man BUT after each jump it takes new prisoner.

It is important that in Towers pieces are never removed from the board. Only higher towers are formed. Each tower belongs to the player, who’s man is at the top.

If man (ordinary piece) captures the tower, then the only top piece of the tower is placed under the capturing piece. Let’s get back to the situation where we finished the last example. Black is on the move and he has to capture the tower commanded by White.

Result of the capture is shown below. The top piece (former towers commander) is placed under the capturing piece. Meanwhile, the previously imprisoned man was “freed” as a result of this move.

Game will often lead to situations when one tower captures another tower. Again, only top piece of captured tower is removed and placed under the capturing tower, and the remaining part stays on its place (and is now commanded by a man who was just under the commander). 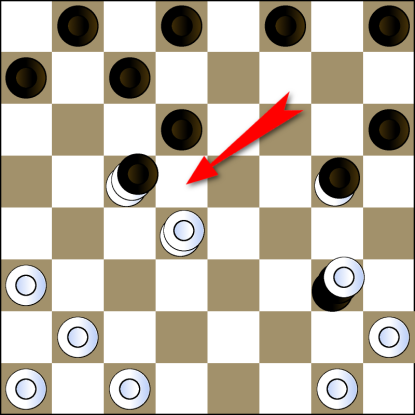 As a result, white tower commander goes to the bottom of Black’s tower, but one white man will remain on its place. This is shown on the image below.

All examples shown above were just single jumps but remember – in Towers multiple jumps are also possible and each jump results with imprisoning one enemy man.

As you can see, the effects of capturing can be surprising. Sometimes capturing cause a sudden increase of your own forces, but sometimes it may increase a number of enemy pieces.

A man reaching the last row becomes a King (we say it’scrowned). King gains a power to move any number of squares diagonally forwards or backwards (so we have a “flying king” here, just like in Russian Draughts). 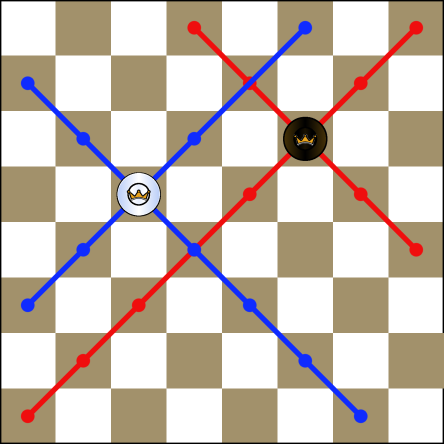 If a tower reaches the last row, then only its commander is crowned. Such tower (commanded by a King) has a rights of King.

Note: In many draughts games King is marked by placing a previously captured piece on a promoted piece. In Towers it would not make sense because two pieces create a tower. So in Towers Kings are marked by placing promoted man upside-down. In this article Kings are shown as men with a crown. 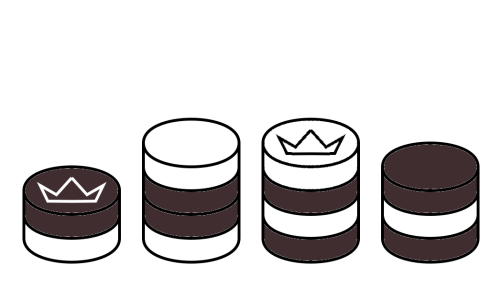 The aim of the game is to leave your opponent with no valid moves. It can be achieved by “prisoning” all of its pieces or by blocking them. 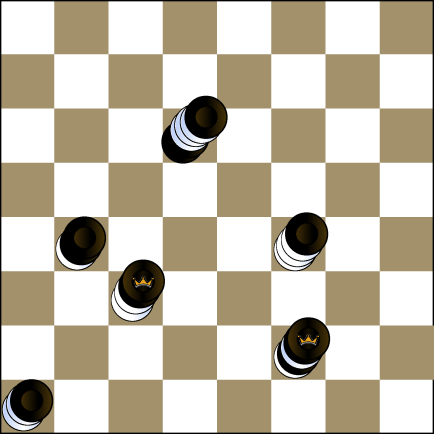 This game can be really surprising because one good shot can dramatically change the number of forces on both sides. No pieces are removed from the board, and some may be released at the end of the game.

Laska is a game developed by Emanuel Lasker, an outstanding chess player, mathematician, philosopher and of course games enthusiast. Apart from Chess Lasker loved Contract Bridge, he was interested in playing Go and invented Laska in 1911. It is believed that Emanuel Lasker intended to combine Towers with English Checkers and Laska is a really successful mix of these games.

Before we go to the description of the rules, I will mention that you should not confuse Emanuel Lasker with Edward Lasker. The latter E. Lasker was also a well-known chess player and he was also interested in Go and Checkers. Both gentlemen were distant relatives, although for a long time they did not knew about this (but they knew each other as two prominent chess players of their times).

At the beginning of the game there are only white and black pieces on board. They are set in such a way that there is only one row of unoccupied fields between them. The initial setting is shown on the image below. 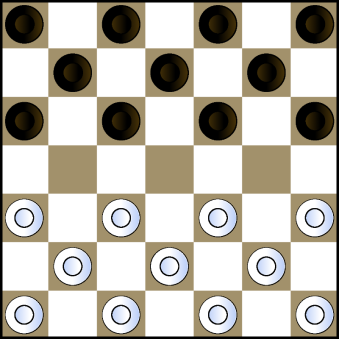 Rules are similar as in English Checkers.

In Laska, just as in the Towers, the capturing results in placing a captured piece under the piece that jumped them. This way a column is formed. Column consists of a commander (at the top) and improsined piece(s) placed underneath. If column captures more pieces, they are placed at the very bottom.

If the column is jumped, only its commander is removed and placed under the capturing piece or column. The rest of a column stays on its place and is now commanded by previously imprisoned piece.

In Laska multiple jumps are also possible and each jump results with imprisoning one enemy piece.

Ordinary pieces and towers are promoted if they reach the last row. Promoted piece is marked by turning it upside-down or by replacing it with a green one (for white’s pieces) or red one (for black’s pieces).

Promoted piece gains the ability to move and capture forwards and backwards. Still it can move only one square backwards or forwards (we say it’s a non-flying King, as in the English Checkers).

If a column reaches the last row, then only its commander is promoted. Such tower (commanded by a promoted piece) has a rights of promoted piece.

The aim of the game is to leave your opponent with no valid moves. It can be achieved by “prisoning” all of its pieces or by blocking them.

In Laska its hard to end game in a draw because of the board design (it has two main diagonals). In the majority of draughts games, the board has one main diagonal and it allows one player to move promoted piece between the two squares and prolong the game. In Laska it’s not possible.

Laska is fascinating because it’s possible to win a game even after losing many piece. One multiple jump in the ending can change the situation.

Laska fans often play on boards that don’t look like a chessboard. These boards have circular fields of one color. 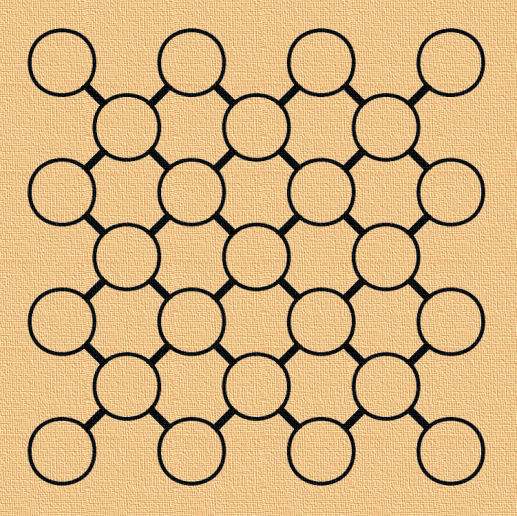 In fact this board is totally compatible with the 7×7 chessboard. It’s like a chessboard with white squares “cut out”, and circles instead of dark squares. You can also meet another version of the board without the lines between circles.

No matter on which board you play. The rules are always the same.

Read my other articles on draughts games.