Matador is a domino game, typical and unique at the same time. Typical because players use tiles to build a line of play and the goal of the game is to get rid of all bones from hand. But matador is unique thanks to the unusual rule of combining tiles and thanks to the existence of special tiles that can be added to the line of play at any time.

It’s possible to play Matador with double-nine dominoes and with more than 4 players.  But this is less popular.

Dealing and start of the game

The rest of bones lies face down. They form so-called stock (or boneyard)

Rule of building a line of play

The player with highest double is first to play (but he can play any tile). Next players make their moves by adding tiles to the line of play.

The rule of combining tiles is specific. Two adjacent ends of tiles must have a total of seven pips. It means that:

Example of the line of play is shown in the image below.

With such rules of adding tiles, blank dominoes are a bit problematic. You can’t use them to make a total of 7 on adjacent ends. Well… blanks can block a game on one or two sides, but there’s a solution.

All matadors are shown below.

Matadors are played crosswise. They can be added to blanks, and blanks can be added to matadors. The image below shows the line of play with one matador (in this case it’s 2-5).

Matadors can also be used at any time (they match every value).

If matador is added to non-blank tile, the game can be “reopened” by adding a blank to it. The example below shows such situation. Matador was played on the right side of the 5-5 tile, and the game was reopened with 0-3.

If a player is not able to play any bone, he draws tiles from the boneyard until he finds one which can be played. If boneyard is empty, player must pass.

End of the game

The aim of a game is to discard all tiles from the hand by lining them on the table. It’s possible to block the game (when none player is able to play tiles).  In this situation, the winner is a player with the lowest pip count.

You can play Matador with scoring rules similar to those in Draw Game.  The winner receives as many points as the total remaining pip count of the opponents’ hand. The game continues in the next rounds until one player reaches a certain number of points (mostly 100, but games to 50, 150 or 200 points are also popular)

As always in domino, the game has many variants. Below I present alternative rules for Matador. These rules can be used in various configurations, so if you play with your friends remember to agree on specific rules before you play. 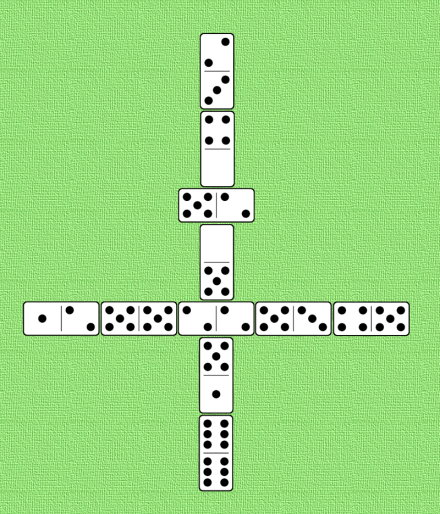 Matador is a quite popular game so its fans have developed some strategies. Of course, matadors and blanks are of key importance. Blanks allow you to block the game at one or two ends. Matadors allow you to reopen or block a game (if they are played when opponents have no blanks left).