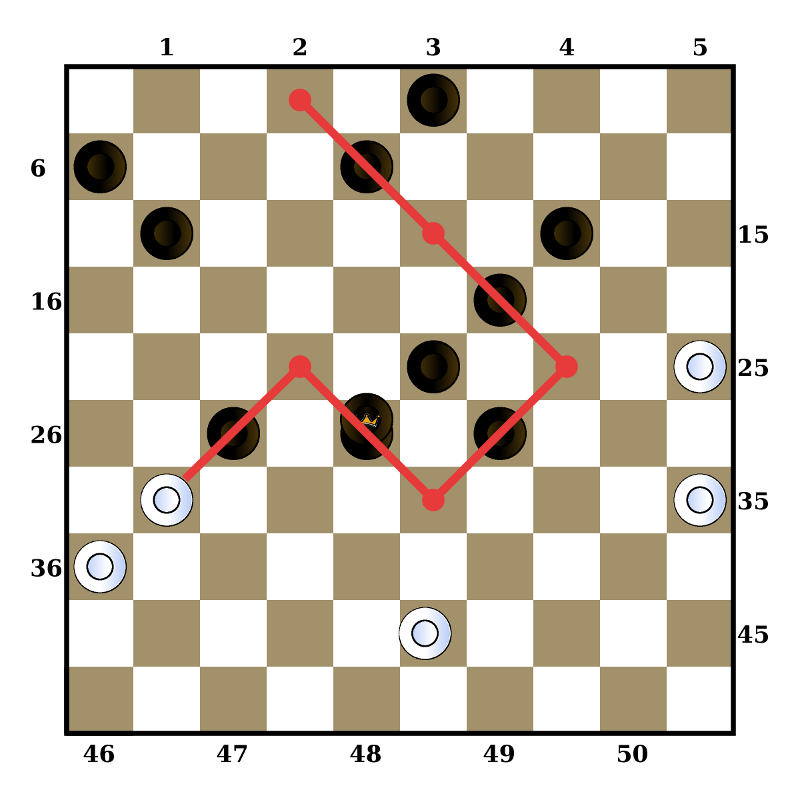 Napoleon Bonaparte was an outstanding strategist but he also had a need to test his strategic skills in games. He played chess but rather badly. Usually, he sought weaker opponents. He also liked draughts and maybe he was quite good in this game. We can guess so because one of the classic shots in international draughts is named after him. We do not know exactly whether he invented it, but learning this shot is another important stage of my draughts tutorial.

In the previous parts of draughts tutorial, I discussed the basics of the strategy, the rules of notation and one example shot. Now we can start a series of lessons that will show you more classic shots. This will let you better understand international checkers tactics.

Let’s start with a legendary shot. Apparently, Napoleon made it during a game with an unknown soldier. Look at the position shown below.

Napoleon played the white pieces. His move was 28-22 (see below).

Napoleon’s opponent thought it was an obvious blunder. Black must respond with a capture 17x28x37x46. White immediately loses three men and black gains a King. Seeing this, the soldier proposed to undo the move. Napoleon said that a real commander must bear the consequences of his decisions. So… the soldier made a mandatory capturing and this led to the position shown below.

In this situation, new King is forced to capture 46×28. This leads to the situation shown below.

Black has to make another capture – 16×27. Result is shown below. 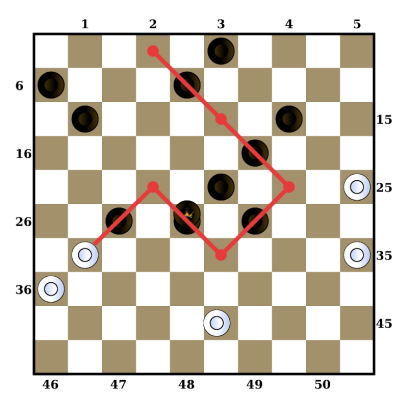 Black has no chances to win this game. White wins in few next moves.

I made a video to show this shot better.

Napoleon’s shot – how it works?

We do not know if this story is true,. I mean we don’t know if this shot was really invited or used by Napoleon Bonaparte. We know, however, that the theory of draughts knows “Napoleon’s shot” and the main features of this shot are as follows.

In this classic example of Napoleon’s shot White player performed the following operations.

Seriously? He did only those to things?

Yes. Look at the initial position and you’ll notice that there are only two Black men missing to complete the final jump. Squares, where these Black men must stay, are marked below in red (squares 28 and 27). Squares marked in blue shows points of final jump. This colored diagram allows you to understand how the White player “saw” this combination in his mind. 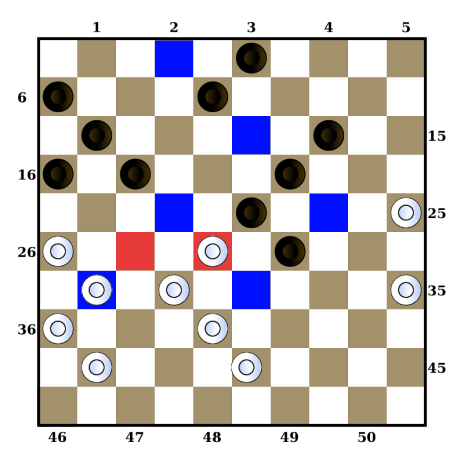 Moving the black man from square 16 to square 27 was the easiest phase, but it had to be made at the end. It was much harder to move a black man from 17 to 28. Letting it jump to square 46 was crucial and promotion to King was exploited to move it to 27. It seems quite simple when you think about it this way.

A variant of Napoleon’s shot

In practice, you’ll not always see the same position before each Napoleon’s shot. You’ll see something similar but the same. Below I present one of the possible variants of the shot. This time the Black is to move and he will make a shot.

Look at the position below. It’s Black’s turn. 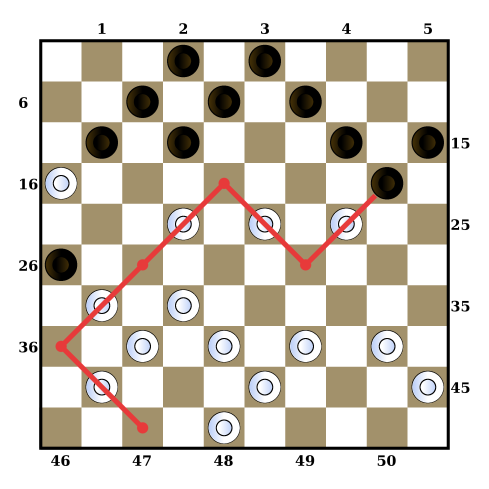 And again you can see the characteristic zigzag and turn towards King’s row.

If you compare both presented examples you will notice that in both cases the attack is started from the shape called gate. It’s quite typical for this shot. Usually, two upper men in the gate are sacrificed, and the final shot is made by the man from the center of the gate. This central man is supported by basis of the gate – a man on field 36 (if White makes a shot) or on the field 15 (if Black makes a shot).

The Napoleon’s shot quite often occurs in real games. Commonly in the middlegame, but I saw examples of this shot made in the opening phase. It is relatively easy to understand and learn mechanics of this shot.

In this lesson, you’ve learned Napoleon’s shot. It always starts from the square 31 (white) or 20 (black). 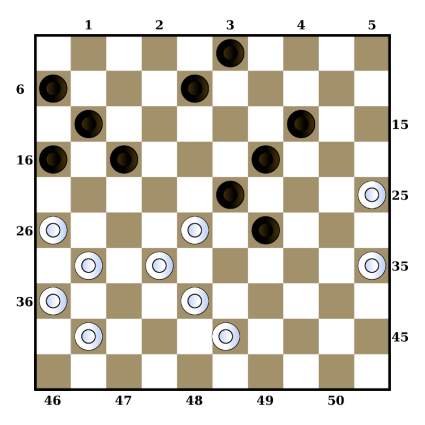 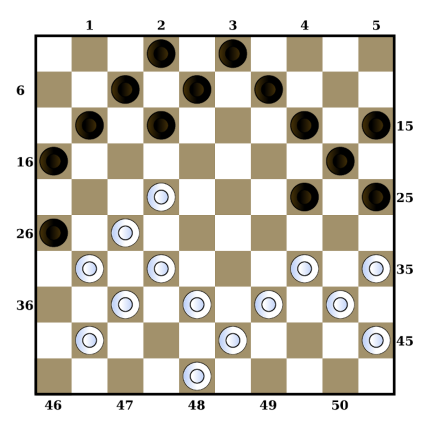 Previous parts of the tutorial: