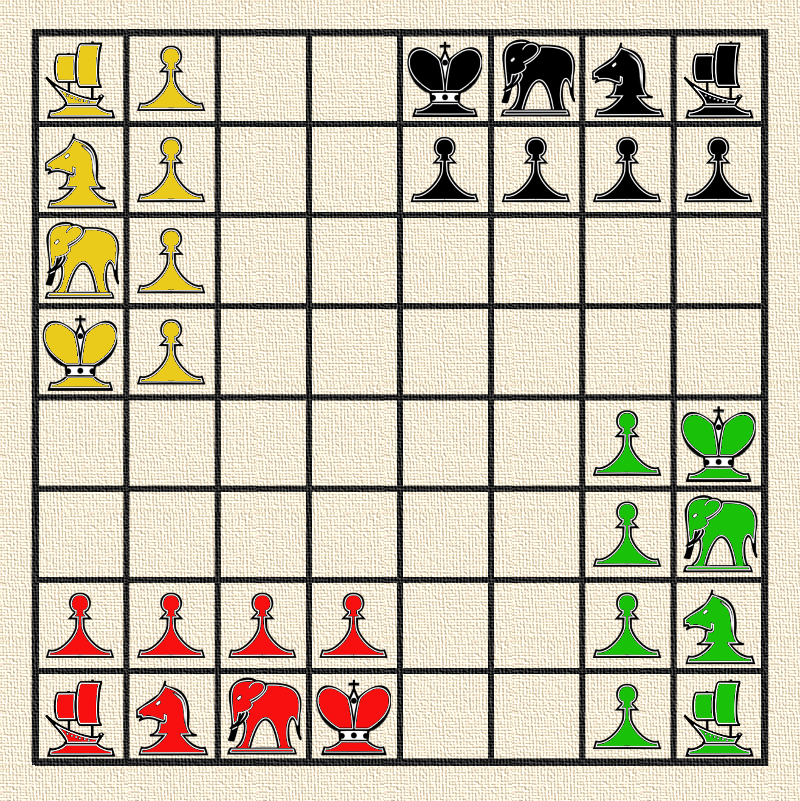 When you hear “chess”, you think about the intellectual duel of two people. Therefore you may be surprised by the fact, that one of the Chess ancestors is a game for 4 players and with an element of luck. The goal of the game was no to checkmate but to score points, however, this old game is still “chessy” . The name of this game is Chaturaji.

Word Chaturaji means “four Rajas”. Even if this game is not a direct ancestor of chess, it’s very old for sure. It’s probably mentioned in Mahābhārata, one of two major Sanskrit epics. Some verses say about the game with pieces in four colors and a dice. The player becomes “a courtier of that high-souled king”. It’s not sure if these verses mention a chess-like game or a racing game like Pachisi. I think that mentioning a “king” and “courtiers” is a clear reference to Chaturaji.

Some books say that Chaturaji was also known as Ashtāpada or Thayaam. It’s good to explain this. The word “ashtāpada” is used to describe the 64-square board that was used to play Chaturanga and Chaturaji (in fact Chessboard derives from Ashtāpada). Some game historians believe that the word “ashtāpada” also meant a race-game with a random element (similar to Pachisi), which was played on a 64-square game board. This theory was promoted by Murray, but he never presented any compelling evidence to prove it.

Thayaam is a racing game played on a 5×5 board. Contrary to what some books write, it has nothing to do with Chaturanga, Chaturaji or Chess.

Perhaps a long time ago in India, there were games with features of Pachisi and Chaturaji at the same time. I mean they could be race games with “chessy” pieces. Or maybe one type of board (Ashtāpada) was used for two types of games and this is a source of misunderstandings.

But let’s focus on Chaturaji. This game is definitely “chessy” and its old. Perhaps it is the ancestor of chess or maybe just relative of the ancestor. We do not know this, but we can enjoy the game and play it! Let’s move on to the description of rules.

Chaturaji – rules of the game

Chaturaji is a board game for 4 players. You can play individually or in teams (two against two). Each player has eight pieces with varied powers. Each move is preceded by a die roll and the result of the roll determines a piece to move. The goal of the game is to score points by killing opponents’ pieces.

To play Chaturaji you need a 64-square board (8×8 squares) similar to chessboard but not chequered. Of course, you can use regular chessboard and that’s quite comfortable.

Board is shown in the picture below.

You also need 4 sets of pieces in 4 colors: black, yellow, green and red.

Dice is also needed for this game. Traditionally oblong (four-sided) dice were used. On 4 long long walls of the oblong dice, there were 2, 3, 4 or 5 pips. You can see some oblong dice on the photo below.

Fortunately, you can use ordinary (six-sided) dice. All you have to do is assume that the player who rolled 1 or 6 repeats his throw until he rolls 2, 3, 4 or 5.

Whats interesting in India players were allowed to throw the dice and catch them in the air. This way skillful player had some control over the outcome of the throw.

At the beginning of the game, pieces are set as shown in the picture below. 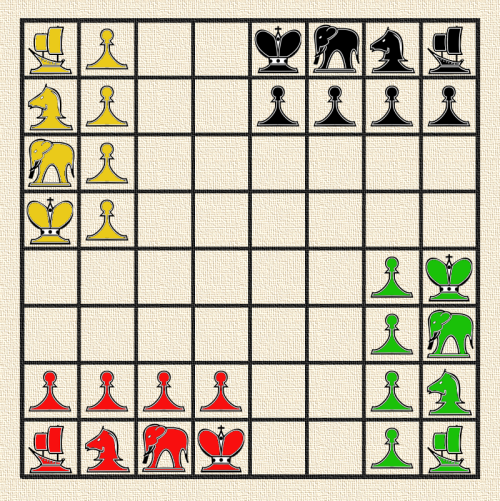 Players take their turns clockwise (black – green – red – yellow). Each player rolls a die before making a move. The result of the throw determines a piece to move. The table below shows die values and corresponding pieces.

If a player lost a piece shown by a roll, he passes.

Each piece has its own way of moving.

Raja (king) – moves one square in any direction (just like a king in chess). The image below illustrates possible moves of two kings.

Elephant – moves any number of squares vertically or horizontally, but cannot leap over other pieces (just like a rook in chess). The image below illustrates possible moves of two elephants. 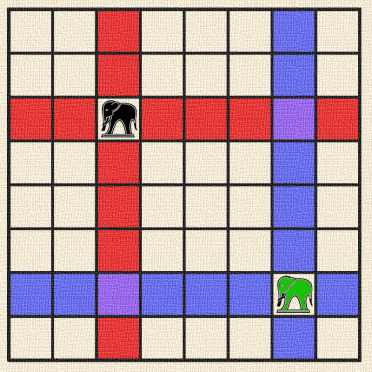 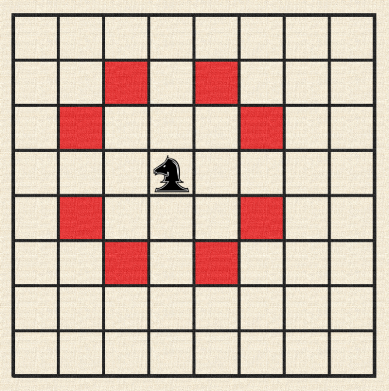 Boat – moves two squares diagonally in any direction. If the intervening square is occupied by opponent’s or friendly piece, boat jumps over this piece. 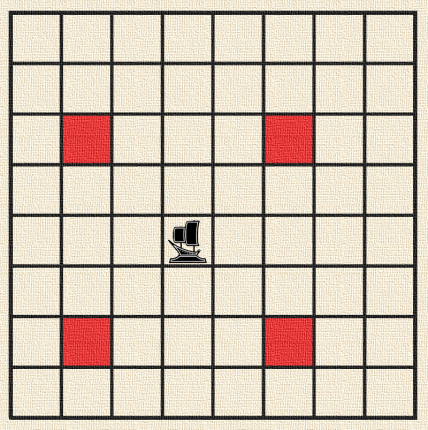 Pawn – moves one square forward to the unoccupied square immediately in front of it (except when it captures). So it moves just like a pawn in chess. You have to remember that “forward” direction is different for each player. The image below shows example moves of four pawns of different colors.

A pawn captures just like in chess – moving one square diagonally forward. I’ll explain that below.

Just like in Chess, all pieces capture by moving to the square that the opponent’s piece occupies. In the situation shown below, a black elephant may capture red raja.

The captured piece is removed from a board.

Pawn is the only piece who moves differently when capturing. Normally it moves one square forward, but it can capture only one square diagonally forward. If any piece stands just in front of the pawn, the pawn may not move forward (it’s blocked).

In the picture below, we can see two black pawns. One of them (highlighted in red) may capture green elephant. The second one (highlighted in purple) is blocked by the boat.

There is one special move in Chaturaji called “Boat triumph” or “Boat parade”. This situation occurs when all boats meet on a 2×2 square. Example of boat triumph is shown below.

A player who moves last to form a full “Boat triumph” captures all opponents’ boats. In the situation shown below red boat has a chance to form a “Boat triumph” by moving to a square highlighted in red.

“Boat triumph” is the only way for the boat to capture another boat. Due to the way of moving boats may not simply stand on the same squares.

Whats more the promotion is possible only if piece promoted to have been previously captured. So if a player has his elephant on the board and the pawn standing in front of reached the last line, this pawn can be promoted only after losing the elephant.

The goal of the game and scoring

The goal of the game is not to defeat the raja (king), as in other chess games. In Chaturaji the goal is to earn points for capturing opponents’ pieces. The table below shows the number of points rewarded for a captured piece.

Chaturaji can be a team game (two against two). Players forming a team sit on the opposite sides of the board. There are additional rules for team play.

While making research for this article I found mentions about two interesting rules. You may use them or not.

Sooner or later someone will ask this question. Are dice really necessary? We can play Chaturaji just like we play Chess, without the element of luck. Why not?

Of course, you can play without a dice. As far as I know, the diceless variant was known in India since the 19th century. I don’t know if there is one set of rules for such purely strategic game. Personally, I think it’s good to adapt team play variant for playing without dice. And the goal of the game should be to kill both opponent kings, not to score points. You can agree that if one player loses his king, his pieces are “frozen” until the end of the game.

I stress that there are no one standard sets of rules for Chaturaji. When a game is really old, there are always many “alternative rules”. You should just try to find the best variant for yourself.