Why Othello can be extremely exciting? Because each game can be lost or won in the last few moves, or even in the last move. One last decision can affect the final outcome. Therefore in Othello, endgame strategy is more than “finalizing the gained advantage”. Skillful playing in endings is extremely important.

In the previous parts of my Othello tutorial, I wrote about the basics of strategy, quiet moves, openings and edge play. All this is extremely important and if you can use this knowledge in your play, you should win with a weaker opponent long before the end of the game. Sometimes ending seems just a formality to pick up a victory you deserve. But this is true only when you have a clearly weaker opponent.

If you play with an opponent as strong as you, the game will gradually approach to the corners. Nothing will be certain until the very end and everything will depend on the few last moves or even one last move.

Playing Othello is an art, but in endings, it turns into science and math. You have to calculate the results carefully. You will find that it’s not always easy.

Look at the example shown below.

It’s White’s turn to move. The game comes to an end and White’s position seems quite hard. White has no ways to take any corner and has to play close to the corners (increasing the risk of losing them). Does White have any chance to win? Yes, but there is only one way to do it.

First White has to play H2. The result of this move is shown below. 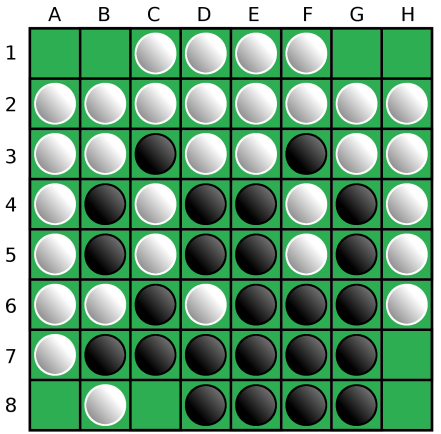 You can be sure that Black will respond with H1 (he takes a corner this way).

Black wins another corner (plays A1)

Now White can take the A8 corner. And he/she does that! 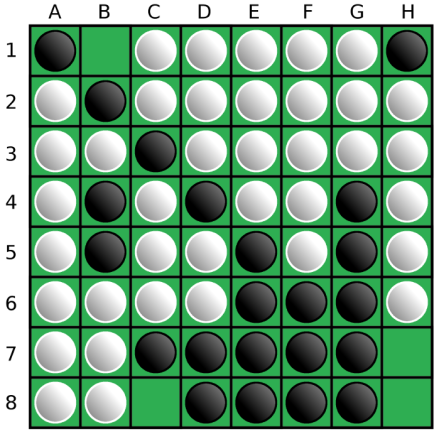 Black has no many options left. He responds with B1.

Now White has an opportunity to build stable disks from A8 corner. To do this he must play C8. 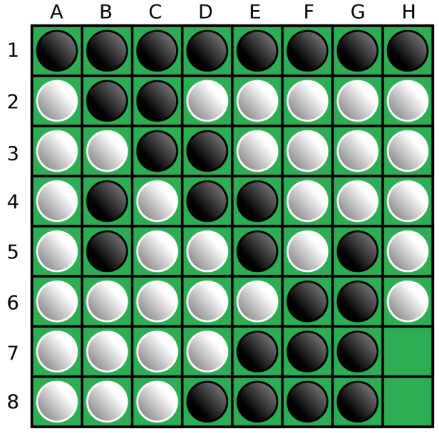 Black has only one possible move – H7.

You can see all this on a video I made.

This ending is interesting because the presented way is the only one that gives White a win. You can try it on your own board. White has no chances if he plays differently. The last 4 moves are decisive and one minor error affects the outcome of the game. This raises an important question. How would White know how to play? And the answer is…

There are two main diagonals on the Othello board, traditionally called “white” and “black” (names come from a way of setting disks at the start of the game).

Notice that squares of these diagonals do not overlap. If one player controls whole main diagonal, he/she can safely play in the so-called “X-square” without risk of losing a corner. Note that in the situation shown above Black had a full control over two main diagonals. 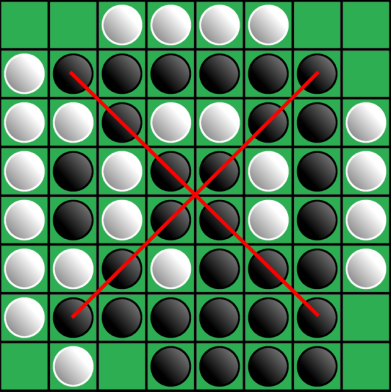 With this in mind, you should understand that in the situation shown above White had to “cut” the diagonal. That’s why he played the H2, and then G1. After playing G1 he gained his own disk on the black diagonal and this enabled him to take the A8 corner later.

As you can see, the A1 and H1 corners were lost quite early, but White found a way to win A8 and this enabled him to continue the fight for H8. This fight was possible by building stable disks adjacent to A8. Building stable disks was made by playing C8 and then H8. This whole example shows, that two things are important in endings. I mean…

Fight for a corner is not always the most important thing in endings. In fact, you can lose in ending just because you took corners “automaticaly”. Take a look at another example.

It’s Black turn. There’s only one move left but this move is decisive. Should Black play H7 or H8?

This is the outcome for Black. After playing H8 his final disk count will be reduced by 2 disks.

Now you know it for sure. H7 is the only good move for Black.

Addition and subtraction of small numbers is easy, but counting in Othello is quite hard. This skill requires imagining the effects of two successive moves. Whats more, in ending each move may result in flipping many discs. If you want to count these disks, you must first see them flipped in your head. It doesn’t come easy for beginners.

In the example shown above, it was optimal to abandon the corner. While the corners are important for building stable disks, in the last or the last two moves you need to take into account that it may be better to win disks not adjacent to the corner. In endings you always have to count!

Counting is important, but in the endgame, there are also special situations called “swindles”. You must be careful to not overlook them.

“Swindles” occur when in some area near the edge there are two unoccupied squares (the so-called pair). In endings, those squares are just near the corner.

From the previous lesson, you know that the pair is immune to attack. However, there are situations when you can safely play into a pair because the opponent will not be able to respond in that area. Let’s look at the diagram below.

Its Black’s turn. At first glance, the A1 seems to be the best move because it means getting 6 discs in A column. However, White will respond with B1 and black will lose 6 disks.

If black plays in B1 it will get only 1 disk, but what will happen later? There will be no legal move for White so he/she will pass. Black will be free to play A1, gaining 6 discs and winning the game.

This example of a swindle is very simple. There are more sophisticated swindles, but first, you have to learn to spot these easy ones. Therefore, it’s important to take into account what the opponent may do after your turn. Sometimes you’ll notice that some of your moves will force your opponent to pass or at least they bury his chances to take over the corner immediately after you played in a pair.

This swindle is interesting because White will lose despite controlling the diagonal. Whats important here is that Black can win thanks to the tiny wedge on the A7. It pays to put wedges, because in endings their importance may be great.

You can improve your skills by solving problems and in Othello training, these problems often involve endings. You can find many nice problems to solve on the World Othello Federation website. You can use an interactive application to play each problematic situation with a computer.

If you want to practice endings regularly, I warn you to not think just about “finding a way to win”. Always think about WHY you can win by playing in certain way. Always pay attentions to diagonals, building stable disks and counting.

Previous parts of this tutorial

One thought on “Othello tutorial p. 5: Endings. How to not fail in last few moves?”