So-called Beginner’s shot usually occurs in openings. It’s quite easy to spot opportunity to make it. Nevertheless, it happens that experienced players fall into this trap.

White makes a first attack with 33-28

Black prevents the attack with 14-19

And now something important is happening. White makes a seemingly strange move by playing 28-22. He gives up one man and apparently does not get anything in return.

Black is obliged to capture (17×28). This leads to the situation shown below. 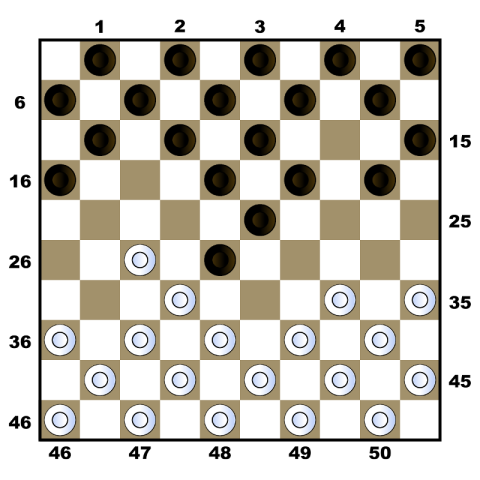 Do you see what happened? White has a chance to make a triple jump. The only thing he has to do is to remove the black man from square 23. It can be done by playing 34-29. After this move black is obliged to capture – 23×34.

Beginner’s shot – how it works?

The essence of a Beginner’s shot is to make use of a situation where three opponent’s men are positioned on one diagonal, in the center, in the shape of so-called “phalanx” (one behind the other). The shot is possible when you can force double jump, and additionally, one man on the side allows you to “bounce” after the double jump. Such a situation is shown in the diagram below. Note the setting of black men on the squares marked in blue.

It’s really easy to spot the shot opportunity. The only thing to do is to pull away a middle man from the “phalanx” on squares 28, 23 and 19.

Let’s go back to the example discussed above. It’s no art to spot a shot opportunity when the phalanx is mounted. But in the real game, you need to see it earlier. Look on the image below. It shows a moment that was really crucial.

This was the point! This seemingly senseless white’s move (28-22) created the whole shot. Ans this move set the black men in the “phalanx”.

I made a video that shows this combination.

What’s interesting, beginner’s shot may appear on the board in the “mirror image”. It is not a literal mirror image because the checkerboard is not symmetrical. But I mean a very similar situation, just reversed from right to left. Take a look on the image below. 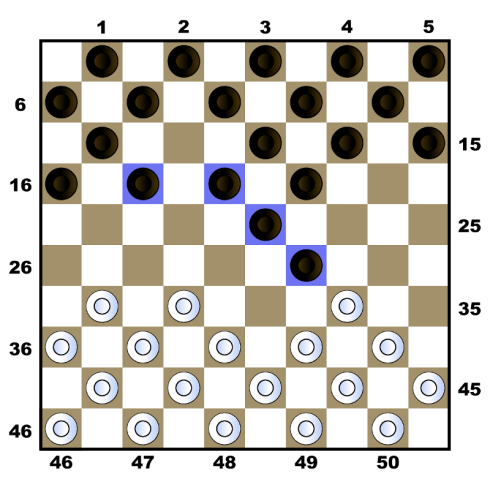 Beginner’s shot made by black

Let’s say we have a situation like this shown in the image below. Black is next to move.

What should black do to make a shot?

It could be worse!

The beginner’s shot does not always end with just a triple jump. In rare cases, it may end up with promoting a man to a King. Let’s look at the diagram below. Suppose the last move belonged to White who played 50-44. This was not the best move!

In this lesson, you’ve learned a beginner’s shot that can be made from squares 32 and 34 for white or 19 and 17 for black. It usually occurs in the initial phase of the game, and its occurrence is preceded by the construction of a “phalanx” of three enemy men in the center.

From the begining of the game…

Previous parts of this tutorial