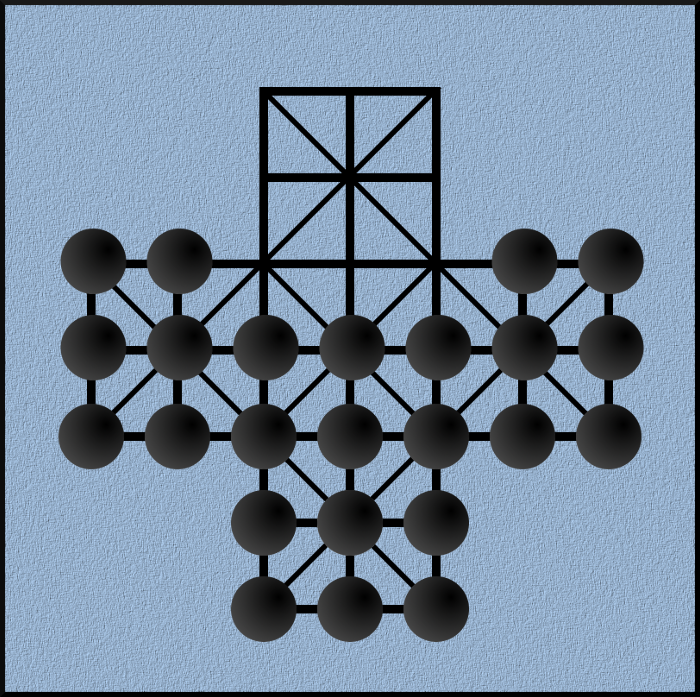 I already wrote on Halatafl game and its variants such as Freys-tafl. Generally, these are “fox games”, where one player plays with the “fox”, and another player plays with “geese”. Aim of the game is different for each player.

In some Halatafl variants there is only one “fox”, and the aim of the game is to kill the Geese (for Fox) or to block Fox (for Geese). Today I want to show you three slightly different variants in which there are two Foxes, and players fight for a territory.

END_OF_DOCUMENT_TOKEN_TO_BE_REPLACED

On Bona Ludo I already wrote about Halatafl or “fox and geese” – a game from Iceland. I mentioned this is old game so there are many variants. Now the time has come to describe these variants and game of Freys-tafl is good starting point.

END_OF_DOCUMENT_TOKEN_TO_BE_REPLACED

Halatafl is a very old board game known probably in XIV century. You can meet various theories about its origin. Some says it’s a game from Iceland, others call it the “game of the Vikings”. It is mentioned in Grettis saga, one of the Icelanders’ sagas detailing the life of Grettir Ásmundarson. Game was popular not only in Scandinavia, but also in the UK. What’s interesting, in Asia you can meet similar games.